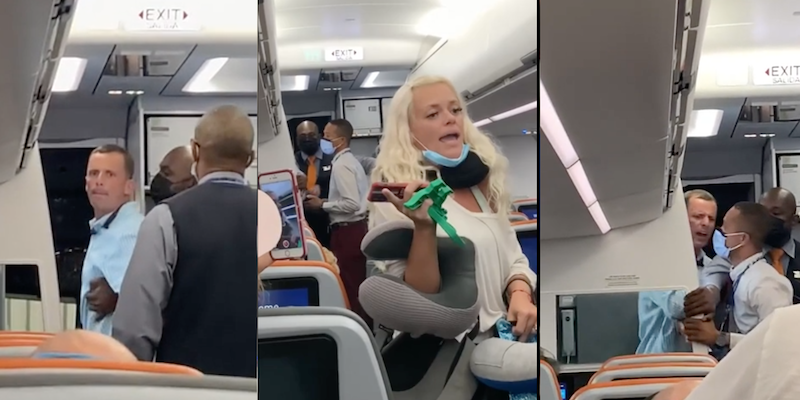 The incident occurred after a dispute over face masks.

A couple was kicked off a JetBlue plane after they did not comply with the mask mandate and screamed at flight attendants. The incident was captured on video and is widely circulating on social media.

Other passengers filmed the scene as the man stood in the front of the plane with his mask removed, screaming and cursing at the flight attendants who were attempting to make him exit. At one point, he even attempts to get physical with an attendant.

The man’s partner, a woman, was toward the back of the plane but made her way forward during the video, also yelling while talking to passengers and berating the flight crew.

“You made me wait four fuckin hours for this flight, you know that?” the man yells at an attendant while shoving his finger in his face. The flight was from Fort Lauderdale, Florida to San Diego.

In the video, the man can be heard claiming that his neck pillow had accidentally pulled down his face mask. He said he was only given “one warning” before being asked to deboard the plane.

According to a statement from JetBlue to NBC San Diego, the man was asked several times to comply with the mask mandate before being escorted off.

The footage made its way to the subreddit r/iamatotalpieceofshit where redditors criticized the couple. The caption of the post claims that the couple was intoxicated, but there does not appear to be evidence of this.

While the video shows the man continuing to act irately with the crew, the woman walks up the aisle, takes her mask off, and speaks to the many people filming the action.

She mentions them having a 5-year-old son who was also allegedly apart of the commotion, but is never shown on video.

“They’re kicking us off and I don’t know why. We’re Americans,” the woman says as people sitting seem to urge her toward the exit.

“I have an expensive watch on board, I’ve got my backpack on board,” the man yells, saying he wouldn’t get off the plane until he was given his things. The crew assures him that his belongings will be given to him once he gets off the flight.

“Damn it don’t say you’re American! Can’t you say you’re Canadian or something? You’re ruining it for the rest of us! LOL jk, we fvckd already,” wrote redditor u/Orange45TP.

“No one on this earth would believe those two asshats were Canadian lol,” replied u/Llminibean.

At one point the woman also threatens to sue the airline, saying, “everyone I know is an attorney.”

“I love how people like this always threaten to sue these huge companies, I’m sure their shitty lawyer has a chance against a fleet of corporate attorney’s,” wrote u/egospiers.

In a final attempt to win the argument, the man tells a flight attendant, apparently named Frank, to “face everybody” and “fucking turn around.” At this point, the seated passengers have had enough and yell for the man to “get off the plane.” He finally does, looking sad while being escorted by one of the attendants.

“Once he realized the rest of the white people weren’t on his side, he shamefully scurries away. little rodent,” commented u/TheRedNarrator.

Once the couple leaves, the passengers cheer and show support for the crew.

While higher fines and stiffer penalties have been enacted since the rise of unruly behavior on aircrafts this year, it is not yet known what “punishment” these two passengers will receive. Many have speculated, though.

“I would be interested in hearing what the FAA fines for being unruly passengers are going to be for these two,” commented Kalikhead.

The Daily Dot reached out via email to a JetBlue representative for an update to the story.