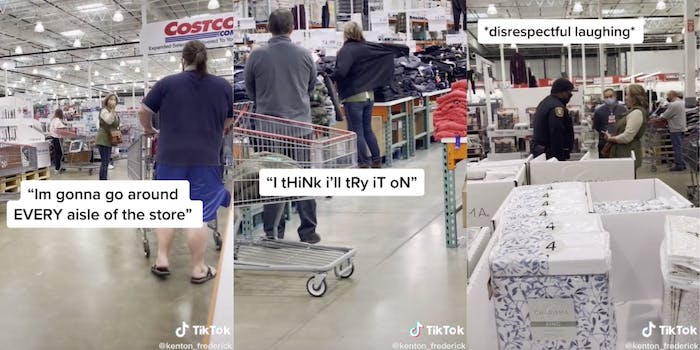 TikTok shows ‘Costco Karen 5.0’ trying on clothes as she refuses to leave store

A viral TikTik shows “Costco Karen 5.0″ on the loose within the retail jungle, refusing to wear a mask or leave the warehouse store in Cincinnati, Ohio. To further disrespect the store’s security and other patrons, she even decides to try on clothes during her reign of terror.

The video, posted by @kenton_frederick, has earned 1.2 million views on TikTok so far. The caption reads, “TikTok took it down cause some of y’all’s comments were a little too harsh. Anyway, don’t disrespect Costco like that #IntroVideo #HolidayVibes.”

With Christmas on the way, sightings of deal-seeking, troublemaking Karens (and Karen videos) are sure to increase. The latest installment shows Costco Karen 5.0 being asked to leave the store, surrounded by three large men likely asking her to put on a mask.

“My answer’s no,” she responds. “You’re wasting your time.”

Costco Karen 5.0 then declares, “I’m gonna go around every aisle in the store.”

The men fail to remove Karen from the store as the drama unfolds. Even after she spots the videographer filming her, she goes about her business. The video cuts to reveal her trying on a jacket.

At the end of the TikTok, Costco Karen 5.0 can be seen laughing in the face of a security guard. She was luckier than her predecessors, some of whom were arrested for their defiance.

In a subsequent post related to a photography challenge in which he’s participating, @kenton_frederick was asked about the woman. He responded, “Haha she ended up leaving after about 30 minutes or so.”