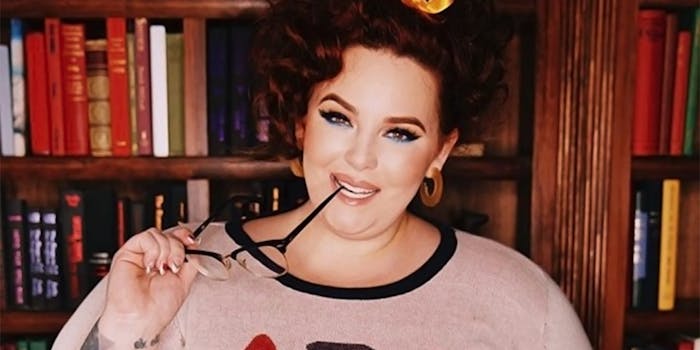 The haters have unsurprisingly come for Tess Holliday’s Cosmo cover

For every celebratory comment, there’s a body-shamer, showing there is still a long way to go.

The new issue of Cosmopolitan UK, which features plus-size model Tess Holliday, has drawn much praise as a win for body inclusivity. But that hasn’t stopped detractors who believe it’s wrong to have a woman of Holliday’s size on the cover of a fashion magazine.

On Wednesday, Holliday posted the cover on Twitter, saying, “If I saw a body like mine on this magazine when I was a young girl, it would have changed my life.” And many young women agreed, saying it was monumental to see themselves represented in beauty and fashion.

How many young women would have been out enjoying life knowing they're beautiful as they are, rather than crying over why they don't look like they "should", if photos like this were more prevalent? https://t.co/yhvnuWwRFG

For some reason I burst into tears when I saw this. Maybe because I used to pore through women's magazines at a teen for HOURS of misery, imagining how much happier I'd be if I looked like them. I just pray this means my daughters won't waste so many formative minutes. https://t.co/pUoSjQaKFF

This photo, I would’ve never taken a year ago. I’ve gained confidence in myself & my body, no matter what it’s like. @Tess_Holliday and @roseybeeme give me the confidence to retort criticism, even from my own mom. Thanks for your help in my journey. #effyourbeautystandards pic.twitter.com/kKBFtd8Isi

In Holliday’s interview, she says she “wants the haters to kiss her ass.” And, well, the haters have arrived—calling her “morbidly obese” and bad role model, among other misguided things—and should probably start puckering up.

⚡️ “Tess Holliday's Cosmo cover is being praised as a huge step forward for body positivity”https://t.co/8DRgeC02mh

Even the notably nasty Piers Morgan felt the need to weigh in on Holliday’s Cosmo cover, calling it “a load of old baloney.” “This cover is just as dangerous & misguided as celebrating size zero models,” he wrote on Instagram.

As Britain battles an ever-worsening obesity crisis, this is the new cover of Cosmo. Apparently we’re supposed to view it as a ‘huge step forward for body positivity.’ What a load of old baloney. This cover is just as dangerous & misguided as celebrating size zero models.

This is the common negative refrain in response to pictures of models like Holliday: that they are promoting an “unhealthy weight.” While many of the commenters draw the comparison Morgan did to it being “just as dangerous” as underweight models, there is not the same level of public outcry when too-thin models are featured.

People who are excited about the Holliday Cosmo cover were quick to take these fatphobic judgments to task, however. As one commenter said, she’s not trying to force you to eat like her; she’s trying to promote “feeling comfortable in your own skin,” said another.

“Fat people are constantly screamed at and bullied for not hating how they look,” style blogger and host of the Fat Girls Club podcast Jessica Torres told the Daily Dot. “It takes a lot of people back and makes them question what we have all believed for years: Fat is ugly and unhealthy. Those who are still slaves to society’s outdated beauty standards tend to be bothered by seeing a fat woman who loves or simply doesn’t hate herself. It must be annoying for them that people have decided to live a great life now and not wait years to be happy and lose weight.”

I love how all the comments are about her health and how we shouldn’t be promoting obesity. Like you don’t know if she’s working on becoming healthier like the models with anorexia but you guys don’t seem to be to care about that.

Why don’t people start realizing the only thing she’s trying to promote is feeling comfortable in your own skin. Whether that’s while your on your journey to a healthier lifestyle or you think you’re living your best life already

For her part, Holliday seems to be able to easily shake off criticism from Morgan and the like—and she looks great doing it, to boot.

“To everyone saying I’m a burden to the British health care system, I’m american so you don’t have to worry about my fat ass,” she wrote on Twitter. “Worry about what horrible people you are by whining about how me being on the cover of a glossy magazine impacts your small minded life.”