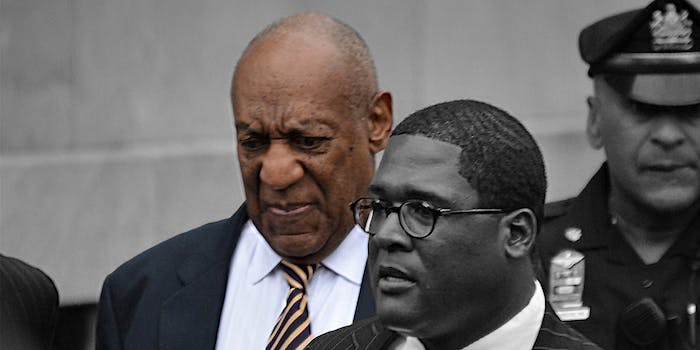 Bill Cosby returns to court—this time, in the wake of #MeToo

Cosby is the first high-profile celebrity to go to court since the movement erupted.

On Monday, disgraced comedian Bill Cosby returned to the Montgomery County Courthouse in Norristown, Pennsylvania, for opening arguments in his retrial. As was the case in June 2017, the 80-year-old still faces three charges of indecent aggravated assault. However, what has changed in the 10 months since his rape trial ended in a hung jury is monumental: Our cultural tolerance of sexual misconduct has reached a breaking point.

Back-to-back reports revealing movie mogul Harvey Weinstein’s pattern of predatory behavior—which persisted as an open secret for decades—kicked off a movement that’s held powerful men across industries accountable for their sexually coercive and abusive actions. In the midst of #MeToo, women inside Hollywood and out are finally beginning to be believed. So perhaps, now, the nearly 60 women who have come forward with eerily similar tales of Cosby’s misconduct will be believed, too.

Like Weinstein’s, Cosby’s alleged M.O. rarely wavered; like Weinstein’s, Cosby’s approach to women seemed to be a known quantity within the industry. This time around, the prosecution will call more corroborating witnesses. It will also have the benefit of #MeToo as cultural context, and that—along with the many years of press surrounding Cosby’s case—might be enough to sway the jury. Might. Attorneys on both sides of the Cosby trial still face formidable hurdles.

Although Cosby faces allegations from dozens of women, his trial hinges on accusations Andrea Constand, a former employee of Cosby’s alma mater, Temple University, originally made in 2005. Constand says the comedian, whom she considered a mentor at the time, invited her to his home in winter of 2004 on the pretense of offering her career advice. Instead, she says he offered her three unmarked blue pills he billed as herbal stress relievers. In her testimony at last year’s trial, Constand said she remembered Cosby saying, “Put ’em down, they’re your friends. They’ll take the edge off.” But shortly after she did, she lost control of her speech, her vision blurred, and she passed out.

Eventually, she said, she was “jolted awake” to “Mr. Cosby’s hand groping my breasts under my shirt.”

“I also felt his hand inside my vagina moving in and out,” Constand recalled. “And I felt him take my hand and place it on his penis and move it back and forth.” She added that she felt “frozen,” physically unable to tell him to stop.

Constand reported the incident in 2005, and gave a deposition to police at the time. So did the comedian: He admitted to giving women quaaludes before sex, although he maintained that they knew they were taking sedatives, and that his encounter with Constand was consensual. Cosby and Constand settled out of court for $3.38 million. However, Constand’s case resurfaced because its statute of limitations had not elapsed when Cosby’s incriminating deposition was released in 2015.

At last year’s trial, the prosecution also called a woman named Kelly Johnson, whose experience with Cosby closely mirrored Constand’s: Johnson tearfully told the court that, when she was an assistant to the comedian’s agent in 1996, Cosby invited her to his hotel room. There, he made her take a white pill that, she said, made her feel as if she were “underwater.” Cosby said it would relax her, but instead it left her incapacitated: She recalled waking up with the skirt of her dress pulled up and her breasts exposed, and the comedian placing her hand on his penis.

Cosby’s defense team tried to discredit both women, assailing inconsistencies in their stories and painting them as unreliable witnesses. The defense called just one witness, and Cosby himself never took the stand; still, after deliberating for nearly a week, the jury announced that was deadlocked, and Cosby’s first run in court ended in a mistrial.

A few notable differences between June’s trial and today’s offer reason to believe Cosby’s accusers might be heard this time around: One, prosecutors are allowed to call as many as five women who can attest to similar treatment at Cosby’s hands, a list that likely includes big names—like former supermodel Janice Dickinson—alongside unknowns. Their testimony should highlight a longstanding pattern of behavior.

Two, it will be hard for anyone to have escaped the worldwide outpouring of harassment stories from women—and men—who’ve watched powerful people continually abuse their station.

At jury selection, all prospective jurors were questioned about #MeToo, and the 12 who were selected—six white men, one Black man, four white women, and one Black woman—said they could remove the Cosby trial from the broader #MeToo context. (One prospective juror has already been targeted for removal after allegedly expressing his belief in Cosby’s unequivocal guilt.)

Day Two of @BillCosby retrial. Cosby's spokesperson Andrew Wyatt told me they expect the jurors to uphold their oath. " This case is not about #metoo. This case is about Mr. Cosby being unfairly charged and we expect these jurors to be fair and impartial."

According to Marshall Hennington, owner of Hennington & Associates Trial and Jury Consultants and who is unaffiliated with the Cosby trial, it’s unreasonable to expect that a cultural current with the strength of #MeToo wouldn’t influence jurors. But even before #MeToo became a movement, we’d all had years of exposure to different versions of the same story about Cosby spiking women’s drinks. And that didn’t translate to a guilty verdict last time.

“We can all be persuaded by what we see and hear and read about a particular case,” he says. “The issue is to what degree are we influenced. Are we absolutely convinced, are we somewhat convinced, or is it just hearsay?”

Cosby has a new defense team—headed by Thomas Mesereau, who secured an acquittal for Michael Jackson on child molestation charges in 2005. They will also be permitted to call a witness who says she once heard Constand boast about conjuring a celebrity sex scandal for financial gain. Hennington expects that the defense strategy will still come down to character assassination, which is often the way sexual assault trials go: Absent forensic evidence, and relying on one person’s word against another, defense attorneys often revert to discrediting the victim. And then, as Hennington points out, Cosby has “done a lot of good things for the African American community and society as a whole, in terms of opening up race discussions, elevating people’s minds, breaking down stereotypes and allowing people to feel good about themselves.” Until relatively recently, he was entrenched in the national consciousness as America’s Dad, and in many jurors’ minds, that image could be hard to shake.

But #MeToo reminds us that pretty much every woman-identifying person has weathered some kind of harassment or abuse from man in a more powerful position, whether it’s a boss or someone posing as a mentor. It reminds us that a cheery and benevolent public persona communicates very little about the person behind the facade. It reminds us that people positioned to think they can do whatever they want often will, especially if they are used to having their messes cleaned up and their demands met.

“You have rich, powerful, successful men getting away with wrongful acts, and the public is sick of it, they’re tired of it,” Hennington adds. “It’s abuse of authority.”

Even so, Hennington doesn’t expect conviction: Cosby is an 80-year-old man facing a possible 10 years in prison. He is still known as a barrier-breaker. And we have ample evidence to suggest that victim-blaming tactics still win defense attorneys acquittals for their clients, even at a moment when the world is supposedly listening to women.

Whatever its outcome, the Cosby trial promises to tell us exactly how far we’ve come since October: Do we believe the celebrity man who for decades enjoyed absolute influence, or do we believe 60 women independently telling more or less the same story?