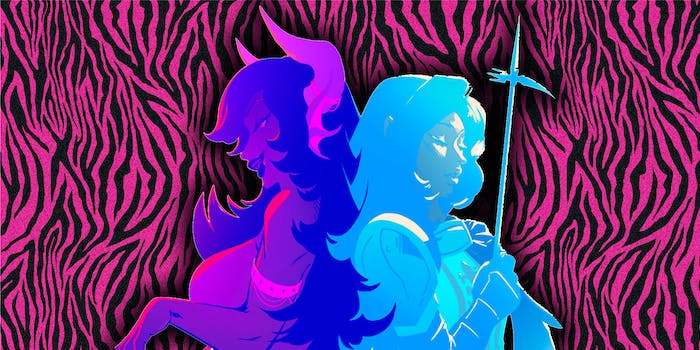 What is Corruption of Champions, the popular adult adventure game?

It’s one of PC gaming’s most exciting (and controversial) adult hits.

If you’ve never taken a dive into the wide world of adult gaming, you may not realize the wealth of options this genre provides. Corruption of Champions is a text-based adventure with a twist, providing a surprisingly deep and immersive story with plenty of sexy monster girls and perverse demons.

What is Corruption of Champions?

Corruption of Champions mod Xianxia’s wiki describes the game as having an “infamous reputation” for “controversial topics such as rape, incest, and slavery,” with its playerbase “split between people who don’t like that such content is romanticized and those who don’t care.”

Some players have criticized the first game’s more graphic elements, but the series’ reception has generally warmed over the years.

Players take on the role of the “Champion,” a nameable character that is offered as a sacrifice to protect their village from demons. After choosing which race and class they’d like their Champion to be, players set out to conquer the demon scourge. In theory, anyway. This objective can later be altered through player decisions.

Corruption of Champions’ general goal is to traverse a series of areas, battling all the way to increase your stats. Combat relies on two factors: health and lust, which you’ll need to keep track of if you’re going to win. Your level and which usable items you’ve collected will also impact the results of any combat.

Win or lose, a sex scene is all but certain to follow any combat interaction. Sex scenes are almost all oriented around rape of some kind; it’s merely a matter of who is on the receiving end. If you manage to come out on top, the following scene will put you in the dominating position. After a loss, however, you’ll be at the mercy of your opponent, regardless of their—or your—gender.

What are some of the features in Corruption of Champions?

The transformation aspect of Corruption of Champions allows for a wide variety of kinks. Players can add or remove just about anything to their characters, from extra breasts and genitals to tails, scales, wings, and antennae. Consumables within the game, called transformatives, change huge swathes of character stats when they are used. If your transformation has become too difficult to manage, a bite or two of hummus should turn (most) of you back to human. If you’re looking to explore a kink or two, however, try consuming some Goblin Ale, tracking down a Mystic Jewel, or trying out a little Snake Oil.

Combat is also central to Corruption of Champions’ gameplay. Three stats affect your character’s capabilities: toughness, intelligence, and speed. You’ll be able to increase these stats as you level up and add new items to your collection, which keeps gameplay interesting and worthwhile. Perks can affect your character health, critical hit chance, and ability to seduce.

A number of non-hostile NPC interactions are also littered throughout the game. Players can get to know a range of well-fleshed characters, some of whom even have their own short quest lines. Most of these will result in some kind of risque reward, and some will additionally earn you special items.

Corruption of Champions deals with hard kinks, and some of the more controversial elements of the game keep players from enjoying it to its fullest. This includes both Corruption of Champions’ emphasis on rape, as well as its extreme fantasy fetishism material. Examples range from genital inflation to breeding kink, pregnancy, mental corruption, gang rape, and more.

While these kinks may be distasteful to some, it remains a huge draw for others. A decade later, Corruption of Champions appeals to players now because of its taboo adult themes, not in spite of them.

What’s new with Corruption of Champions 2?

The sequel to Corruption of Champions was developed by long-time Fenoxo collaborator Savin and released in August on Steam, where it brought a host of new players into the fandom. The visibility granted to the title by Steam helped the sequel surpass its predecessor in online popularity.

Corruption of Champions 2 also allows for a diverse set of relationships, which is a perk for anyone tired of often hetero-centric adult games. This isn’t necessarily a new feature, as the first Corruption of Champions likewise allowed for a range of potential pairings, but fans celebrated its return in the sequel.

The sequel also lets players bring two companions along on their adventures, so build up your team accordingly. Romance and transformation are again at the core of gameplay, allowing players to flirt and flounce their way through character interactions, combat scenarios, and sexual encounters.

The first Corruption of Champions is a bit harder to come by than the sequel. To download and play the first release, you’ll need to head over to creator Fenoxo’s website. There, you’ll find links to the first and second games, along with several other Fenoxo originals. The demise of Adobe Flash Player (RIP) makes it impossible to play the game in an alternate window, but you should be able to download it onto your computer for free by following the download link.

If you’re looking to permanently own a copy of Corruption of Champions 2, it is purchasable through Steam. It will run you $9.99 to acquire, as opposed to Fenoxo’s free option, but the Steam version is still in Early Access. That means you’ll be privy to more content as it’s released, which might make the out-of-pocket expense more worthwhile for fans.

The base version of the original Corruption of Champions is delightful, but modders have added even more to love.

The Fenoxo forum mod repository is the best, and easiest, place to find all the vital mods for your next Corruption of Champions game. This site compiles dozens of handy mods, unofficial expansions, explainer guides, fixes, and editors for your enjoyment. Some of these make the game more playable by fixing simple issues or streamlining elements of the game, but others make distinct changes to gameplay.

The original Corruption of Champions is more than a decade old, and new projects have distracted its original creators away from continued updates and patches. Thankfully, the unofficial expansion brings a slew of excellent upgrades to keep the game interesting.

Modder Kitteh6660‘s unofficial expansion adds finishes off a few incomplete storylines and pumps plenty of fresh content into the final product. It also includes some additional challenges, particularly near the endgame, when some players complain action seems to level off. .

In a game like Corruption of Champions, choice is key. Endless Journey, a mod that’s been evolving for nearly as long as the base game, provides enough additional choices that it feels like an expansion all on its own.

Endless Journey offers a number of new quests, characters, hairstyles, outfits, and perks, along with several bug fixes for known problems in the game. This mod also includes additional gameplay options, new buffs, and tidies up some messy moments noted by players. Simple fixes like corrected typos might be more noticeable than the shifts in textures and scrolling accuracy, but every aspect of this mod is sure to make your game better.

In order to enjoy Endless Journey, you’ll need to create an entirely new save file, so players looking to enhance an existing save are out of luck.