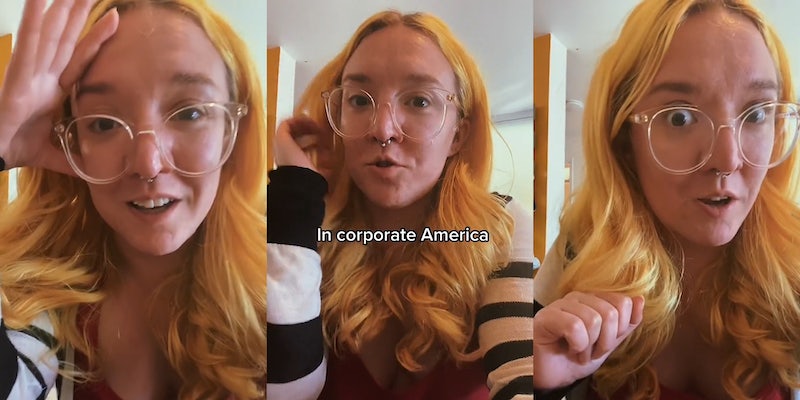 ‘Everyone is figuring it out as they go’: Former corporate worker claims most jobs have no formal training process

'Just entered my first job, and I was mind blown at how unprofessional and unorganized everything is.'

An ex-corporate worker went viral on TikTok after claiming most of her previous jobs didn’t have any formal onboarding or training process.

User @corporateamericaburnout stitched a video from another creator, Jenna (@jennahushka). “What’s something you were not prepared for about the corporate world?” Jenna asks.

“That most companies don’t have any formal training,” @corporateamericaburnout responds.

The creator then shares her experiences, noting that two of her three corporate jobs didn’t have any training. In the ten years she’s worked in the industry, she says most people don’t know what they’re doing. She claims that “everyone is figuring it out as they go.”

In one example, the TikToker notes that she wasn’t educated on the legal concerns of corporate communications with customers at her job. “Nobody told me any of the legalities of communicating with your customer,” she says.

She claims there were legal restrictions regarding the time text messages were sent and contacting those on the opt-out list. “These have serious implications and I didn’t know,”@corporateamericaburnout says.

In the caption, the creator shared her shock regarding the lack of training she’s witnessed. “I’m surprised many companies don’t train their new employees in corporate America,” she wrote.

Data regarding employees’ lack of confidence in their job training support @corporateamericaburnout’s sentiment. According to a survey from Gartner, 70% of workers feel they haven’t been given the mastery skills to successfully do their jobs. There are consequences for companies that don’t have formal training. This leads to unhappy employees, high turnover rates, low rates of production, unsafe work environments, and more, per CHRON.

The video has been viewed over 92,000 times as of Sunday, with it resonating with viewers as they recount stories similar to @corporateamericaburnout’s.

“Just entered my first job and I was mind blown at how unprofessional and unorganized everything is On another note, can you drop the planner?!” one viewer shared.

“Girrrlllll…..tell me about it! I wrote a training manual for two departments’ roles because I got tired of seeing people struggle,” a second recounted.

“I was barely trained and people had the audacity to get mad at me about how I did my job and wonder why I decided to leave,” a third said.

Other viewers expressed their frustrations about corporate America in general.

“By the time a training program is implemented, it’s already outdated. We will find out we were doing something wrong after months!” one person complained.

“And the lack of documentation! There should be an SOP [standard operating procedure] for all these. But instead it all lives in people’s head. Turnover = knowledge lost forever,” a second commented.

“Exactly!! Then you wonder why there’s a high turner rate; people only stay for a year or two most. so they get the experience and dip out,” a third stated.

The Daily Dot reached out to @corporateamericaburnout via TikTok comment.