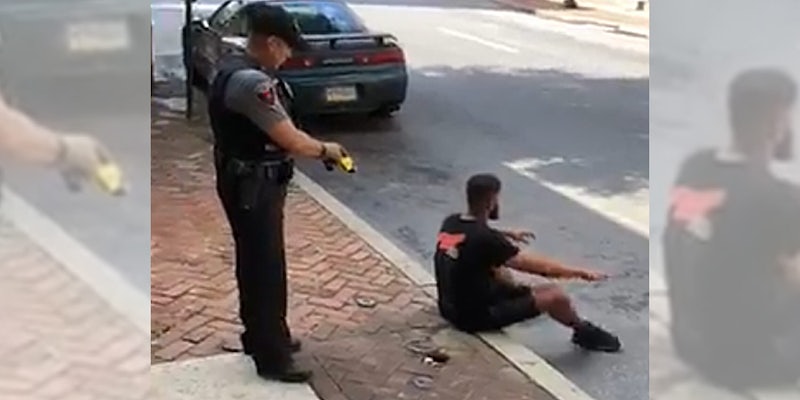 The officer took the man’s confusion over conflicting commands from multiple officers as noncompliance.

A video posted to Facebook on Thursday shows a police officer in Lancaster, Pennsylvania, firing his taser at a compliant man who was calmly sitting and seemingly following the instructions officers were giving him.

The Root reports that the female officer heard in the video, Shannon Mazzante, arrived at 10:16am ET, responding to a call about a disturbance, and the male officer, Philip Bernot, arrived shortly thereafter as backup. The Black man in the video, 27-year-old Sean D. Williams, appears calm and quiet from the beginning of the video, listening to the officers’ instructions and doing his best to follow them. The video starts with Bernot instructing Williams to sit on the curb, which he does.

Bernot then instructs Williams to put his legs straight out in front of him. This is followed by a command from Mazzante to cross his legs. As Williams begins to follow her instructions, Bernot again tells him to stick his legs straight out. Officer Bernot then goes behind Williams, pulls out his taser, and fires it into his back as Williams is still calmly sitting on the curb, trying to follow the conflicting orders from the two officers.

People online are outraged over the use of force on a man who appeared to simply be confused by the instructions.

Worth noting here that the Taser was originally meant to be a substitute for lethal force. This is a good example of how it’s now often a compliance tool when cops get impatient — in this case, for not following confusing commands. https://t.co/5zSvlXWX26

Four cops and a taser to arrest a black guy doing as he's told. A bit slow to statighten his legs, sure. Sudden movements get you shot. The guy's just trying not to get killed. https://t.co/oTEeYOhb6u

In a statement released by police, they defended Bernot’s actions, saying, “Non-compliance is often a precursor to someone that is preparing to flee or fight with Officers.” The department characterized Williams’ confusion as failing to follow instructions, and said, “The use of the ECD had the desired effect and Williams was placed into custody without further incident or use of force.”

Many are wondering why the officer immediately went to the taser, instead of trying to state the instructions in a different way to help Williams understand what they were asking of him.

The mayor of Lancaster, Danene Sorace, said in a video posted to Facebook on Thursday that this has, “affirmed my resolve to implement a body camera program here in the city of Lancaster.”