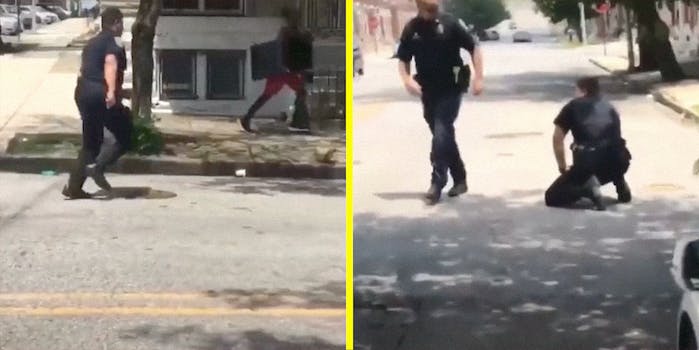 'My boy running with the TV like it's light work.'

TikTok users are roasting a Maryland police offer who was outrun by a man carrying a TV in a viral TikTok.

The camera phone footage, posted by an account that shares street news in Baltimore County, shows a shirtless Black man with a TV under his arm. A police cruiser pulls up, suggesting the man may have obtained the flat-screen by extralegal means.

However, in the comments, one user said the man actually purchased the TV and was heading home with it.

A police officer jumps out of his cruiser, and at first, he appears to have the advantage over the alleged thief. Even after the man takes off running down the sidewalk, the officer is keeping pace.

But the man—still carrying the TV under his arm—puts on the jets, and it’s over. The man zigs through the streets; the officer in pursuit zags on the concrete and eats pavement. Another officer comes to help his fallen colleague, and they both head back to their cars.

The person filming and the small crowd looking on all appeared to be satisfied by the outcome. And the real fun, as always, was in the comments of the TikTok video.

“My boy running with the TV like it’s light work,” user @montezgunn said.

“They walked back to their cop cars,” user @playboisoyy commented. “They were like, ‘you got it, bro.'”