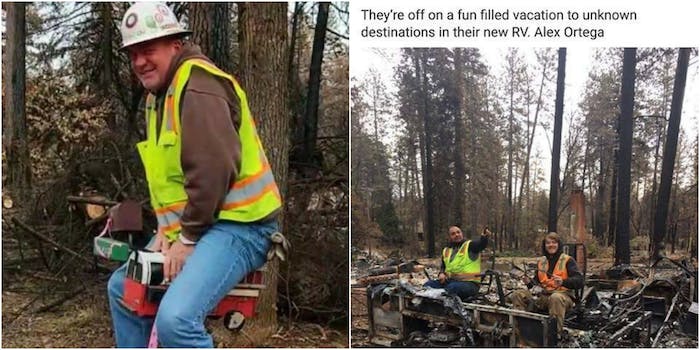 One employee took a photo with a charred cat.

A California-based construction company has fired three of its cleanup employees after discovering they had posted photos mocking the aftermath of the massive November wildfire on Facebook.

An employee of Bigge Crane and Rigging, whom the company identified as Rob Freestone, had posted photos with two other cleanup workers, including one with the remains of a charred cat, after the Camp Fire in Paradise, according to SF Gate.

The photo showed a beer bottle placed next to the cat’s mouth, and was captioned, “Dude…I was just chilling with my homies, having a couple of cold ones, and BAM…damn fire breaks out.”

In another photo, two employees in uniform are seen smiling while sitting on the remains of a large structure, with the caption, “They’re off on a fun filled vacation to unknown destinations in their new RV. Alex Ortega.”

The Camp Fire, which started on Nov. 8, has been termed the deadliest wildfire in California’s history. It burnt more than 150,000 acres, that’s since been contained, and killed 86 people.

“The behavior of these individuals is not consistent with our company values and ethical code,” Bigge said in a Facebook post on Saturday. “Bigge regrets that the residents of Paradise and Butte County have suffered an egregious insult during an already devastating time at the hands of these three individuals.”

The company’s message resonated with many. “As a resident and evacuee of the Camp Fire, I personally want to offer my thanks and appreciation for standing up and making the decision of Termination regarding this situation,” commented one resident.

“Thank you, you did not have to follow through or tell those of us from Paradise anything but you did and your response is heart warming,” wrote another.

“This is unacceptable and reprehensible behavior,” the Town of Paradise page wrote on Facebook. It also said that the Paradise Police Department is looking to press criminal charges.