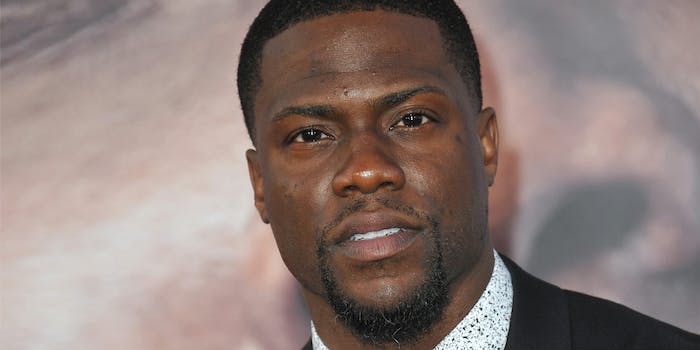 Comedian Kevin Hart is coming under fire from conservatives for backing out of the Oscars following the discovery of past tweets using homophobic language.

Hart announced his decision on Thursday night, just two days after he had been chosen to host.

“I have made the choice to step down from hosting this year’s Oscars,” he tweeted. “This is because I do not want to be a distraction on a night that should be celebrated by so many amazing talented artists. I sincerely apologize to the LGBTQ community for my insensitive words from my past. I’m sorry that I hurt people. I am evolving and want to continue to do so. My goal is to bring people together not tear us apart. Much love and appreciation to the Academy. I hope we can meet again.”

Hart initially dodged the apology, acknowledging the issue on two Instagram videos, but saying he had addressed the issue before and wouldn’t apologize for past behavior. Meanwhile, many of the tweets in question were deleted on Thursday.

The pile-on continued Friday when conservatives on Twitter attacked Hart for relenting and being too PC.

Are there any real comedians left? The unapologetic kind? If so, show them to me…. @KevinHart4real just showed he is a wimp, caved to the pressures of PC ….. #ComedyIsDead #Oscars pic.twitter.com/2aI0X8qVQx

Kevin Hart is latest poster boy for the PC police.

Every time a comedian apologizes and cowers before the PC mob like Kevin Hart recently felt compelled to do my idol George Carlin turns over in his grave… pic.twitter.com/ZDKQrsrwwE

@KevinHart4real really disappointed the soft over sensitive PC kids of today have influenced you to apologize and step down from the Oscar's. #imoffendedbyyouroffense

I don’t think you’re funny, I didn’t see your tweets that got everyone upset and I’m not going to watch the Oscars… That said, I hate what the leftist pc police is doing to comedy and wish you’d have stood up to them.

@KevinHart4real your only mistake was apologizing. The PC crowd baits you into apologizing, not so they can forgive you, but so they can then publicly condemn you. When you are REAL, the folks that matter don't need an explanation. Keep being you. Peace.

Others chose to call out politically correct culture and the “PC police.”

Kevin Hart "confesses" to PC enforcers, who act like Mao's cultural revolutionary guard. "You must publicly repent and tow the Party line." This is liberal America — public show trials. pic.twitter.com/FKEPZn3na8

Remember when the "religious right" was shutting down free speech and expression back in the 80s & 90s? Well now it's the Communist Left with the PC Sergeants & Officers patrolling everything you've ever said or written "Kevin Hart"#FreeKevinHart

What’s it coming to when Kevin Hart apologizes for something he tweeted in 2011. The pc control are whiting out our culture- soon there will be nothing left for them to say lol

Reporter Benjamin Lee collected some of Hart’s old tweets, which have now been deleted.

Some Twitter users made the point that the people digging up Hart’s past were white, accusing them of racist behavior or, at least, not holding white artists to the same standard of accountability.

I didn’t wanna tweet this in case it looks like I’m defending homophobic black men but while I don’t give a damn about Kevin Hart losing his Oscars gig, there is a weird practice of white gay journalists digging through black peoples tweets to unearth homophobia which is sus.

The controversy comes at an odd time for the Oscars; viewership is down, and the Academy reportedly struggled to find a host. But for an event at which multiple LGBTQ performances are expected to be nominated, the Academy of Motion Picture Arts and Sciences could certainly have done more vetting, since Hart has repeatedly told homophobic jokes and stated homophobic opinions, even as recently as 2015.

The Academy has not yet announced a replacement for Hart.