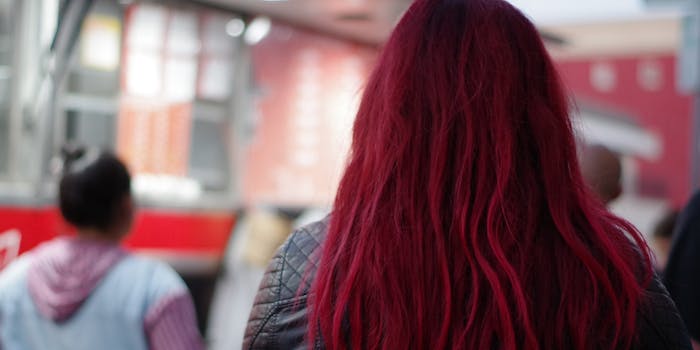 Cue every woman dying their hair to keep this man away.

Ladies, if you dye your hair and can’t get a man, it’s because you’re a poisonous predator advertising your deadly intentions. That’s what one conservative man believes, and his pseudo-science is getting the thrashing of a lifetime over on Twitter.

Self-described trainer, writer, and ballet dancer Alexander Juan Antonio Cortes spends his time retweeting far-right Twitter users like Mike Cernovich, known for propagating the Pizzagate conspiracy theory. He is also a fan of slut-shaming women, navel-gazing about women, and talking non-stop about women. But Cortes’ tweets caught up with him this week after he wrote a steaming hot take on women’s “unnatural hair colors” and how hair dye is scientifically built to keep men away, apparently.

“Unnatural hair colors in woman [sic] are a warning signal to stay away,” Cortes argued. “It’s an example [of] Aposematism—the phenomenon of poisonous animals in nature advertising their toxicity and lethality.”

Cortes went on to compare women with hair dye to “animals like poison arrow frogs” and “venomous snakes,” who use their bright colors to tell other animals “to stay away from messing with them.”

“When you see a woman with red blue green purple rainbow hair, it’s a sign of mental illness and derangement,” Cortes claimed. “Think of Harley Quinn. Obviously she’s more attractive than your typical unnaturally hair colored SJW chick. But would you want to date this girl? She’s literally homicidal.”

Unnatural hair colors in woman are a warning signal to stay away,

Animals like Poison arrow frogs, venomous snakes, they have bright colors and it lets other animals know to stay away from messing with them

When you see a woman with red blue green purple rainbow hair, its a sign of mental illness and derangement

But would you want to date this girl?

Nah, not really. Twitter let him know his theory was flawed.

I am obsessed with the right wing's condemnation of hair dyeing pic.twitter.com/lR4yJAgUFS

Kind of like twitter threads by men making ridiculous assumptions about women's personal choices raises a huge red flag warning us to stay far away.

Congratulations, you are the 1,000,000th guy to uncritically present this load of garbage like it's 1) true and 2) an original thought.

To claim your prize, please stay away.

I had an appointment next week to color my hair pink, blue and orange, but this tweet saved me !! Thank god! I was actually about to express myself freely, imagine the horror

Cortes’ analogy doesn’t even make sense scientifically. After all, humans mate with other humans. We aren’t all hell-bent on killing each other. Of course, there’s always the possibility that Cortes has zero knowledge about courtship and who the predator actually is.

Aposematism is a warning signal to protect against predators, you hilarious fuckup. https://t.co/B5UmIXxtgL

You're really making an analogy between artificial hair dye of non-natural hair colors and animals who have a natural warning color? I don't think you understand how to make an analogy. There's no similarity between the two whatsoever.

*to predators
Poison frogs can fuck each other all day.
Let that sink in

Oh, and Cortes wasn’t spared a few personal insults on the way down.

A couple women even flaunted their dyed hair in his mentions.

I turned 40. Did a radical hair change so I didn’t feel “old”. Doubt this means I’m crazy. And my husband loves it. pic.twitter.com/JI8bMxH644

Never been happier to have hair that I love that will put off men like you! pic.twitter.com/IB5zMc2YOQ

As for Cortes, he’s nursing his wounds in stride.

“I expect the Toxic Thottery to come out in full force for this one,” he tweeted. “Pay attention to the behavior of these succubus’s [sic] and she-devils gentlemen. It will be a lesson for you in what to avoid dating and never reproduce with.”

“I don’t think you have to worry about that last bit,” one Twitter user replied.

I expect the Toxic Thottery to come out in full force for this one.

I don’t think you have to worry about that last bit.