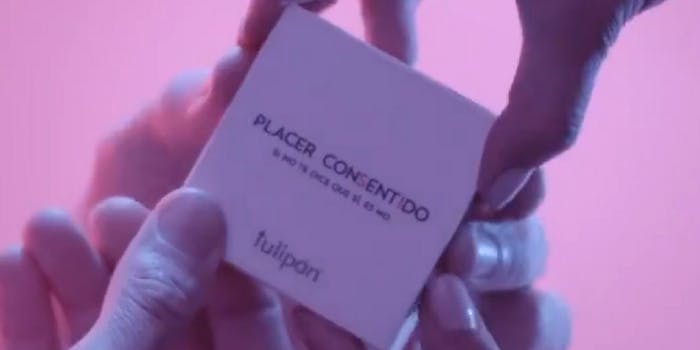 The ‘Consent Condom’ is just another gimmick trivializing sexual consent

There's a lot more to consent than slipping on a rubber.

Picture this: You and your wife come back from a bar and are feeling frisky. Instead of just saying so and reading facial cues, you tap your LoveSync sex button and she taps hers—because you guys are indeed insync—and you two start making out. Things are getting raunchy. You could look into her eyes and ask, “Would you like me to put it inside you?” and grab a Trojan. But instead, you forsake language and reach for the Consent Condom.

Officially called the “Consent Pack,” the Consent Condom stores its rubber in a locked box. The only way to unlock the condom is to bring four hands together to simultaneously press all eight of its buttons. So instead of talking things out before slipping on your condom, you and your wife can fumble with the box, struggle to get the rubber out, and desperately try to slip it on before you go soft. Just another classic date night!

The Consent Condom was designed by advertising agency BBDO Argentina as part of a marketing campaign for Argentine sex toy company Tulipán. Written on the box is “Placer Consentido,” Spanish for “permitted pleasure,” which Tulipán is using as a hashtag on Twitter, according to CNET. For now, the Consent Pack has popped up around the Buenos Aires nightlife scene, but interested sex-havers will be able to buy the box online in due time.

“Tulipán has always spoken of safe pleasure, but for this campaign, we understood that we had to talk about the most important thing in every sexual relationship—pleasure is possible only if you both give your consent,” BBDO’s Joaquin Campins told CNET.

Consent can be violated after opening up the Consent Condom too. One partner might change their mind. The penetrative partner may enter a part of the body unexpectedly and inappropriately. Its user can even slip off the condom without permission mid-coitus, defeating the entire purpose of the box. Sure, metaphorically speaking, the Consent Pack encourages two people to come together and get permission to have sex. But it’s not doing anything to actually secure consent. All it does is make it harder for a couple to slip on a condom.

I know this is probs just a way to try and go viral but:

1. This dumbs down the idea of healthy communication re: sex in a harmful way
2. It's the condom equivalent of dudes asking for recorded videos of consent
3. Putting on a condom ≠ automatic consent of all sexual activity https://t.co/Xuq58MKJlW

OK so I have seen & taken the piss out of a LOT of products in my time but the Consent Condom is definitely the worst one I've seen in 2019 so far. Doubt that many potential rapists are going to be foiled by this https://t.co/WWPKXl74qM

The Consent Condom is ridiculous, but it isn’t an outlier. Over the past few years, companies have capitalized on feminist conversations around sexual consent in heavy-handed ways. There’s LegalFling, which spits out blockchain-based documents with terms and stipulations to fuck. Earlier this year, the aforementioned LoveSync riled up Twitter for turning consent into a technological binary, as if all of sex’s complexities can be boiled down to pressing a button before going under the covers.

Then there are the ways our poor conception of sexual consent seeps into sextech. Internet of Things sex toys have enormous privacy issues, from manufacturers collecting data on their customers’ sex lives to insecure Bluetooth connections that let hackers access toys remotely. In the tech world, reporters talk about the values at play behind the algorithms that power our products. The same is true for sex toys and sextech. If we want to create products built to tackle sexuality’s complexities, we ought to be prepared to look in the mirror and think about how we have sex.

“Without our intervention, a society that historically benefits white supremacy, patriarchy, and harmful assumptions about gender and sexuality will produce technology that enshrines those values,” privacy journalist Janus Rose wrote about tech algorithms for Dazed. “It’s up to us as citizens to reject such a world, and work to create a new one, with technology that works for everyone.”

Consent isn’t about opening a box and securing a condom or pressing a button and declaring you’re ready to get laid. Sex is more complicated than that. Consent is about two or more parties talking through their feelings and boundaries, meeting each other halfway and listening compassionately. In other words, sexual consent is something you do, not get. And our sexual technology needs to reflect that.