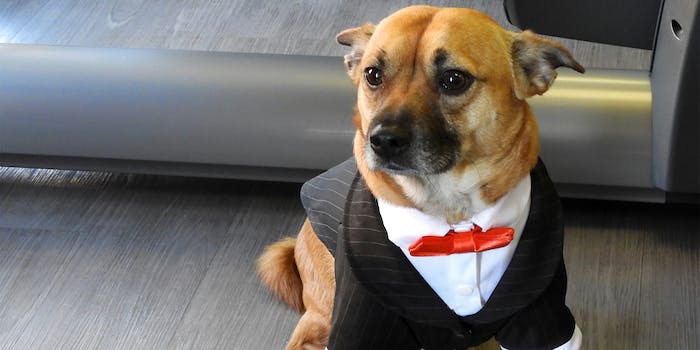 Dogs and cats now get legal support in Connecticut courts

Cats and dogs to the front of the courtroom, please. A Connecticut law passed one year ago is tackling animal abuse by giving cats, dogs, and other animals legal advocates in court.

According to the law, judges can appoint lawyers and law students to serve as advocates for animals when abuse, neglect, and animal cruelty cases arise in court. Entitled “Desmond’s Law,” the legislation went into effect towards the end of 2016, after a dog owner who admitted to beating, starving, and strangling his dog bypassed jail time under a first-time offenders rehabilitation program.

Many animal cruelty cases are horrific and feature cats, dogs, and other animals in psychologically traumatic situations. One case in Manchester was based on eight pit bulls living in unhealthy conditions with alleged dog fighting scars on their bodies. The dogs were found after a utility worker smelt a “foul odor, like rotting flesh” from inside the house

“This is really a groundbreaking law,” Animal Legal Defense Fund staff lawyer David Rosengard told the New York Times. “To get justice, a third voice is needed in that room.”

Legal advocates largely take on investigative duties, looking over police records or interviewing animal control officers when assigned by a judge. In other words, legal advocates make sure prosecutors thoroughly research animal cruelty cases and take their criminal ramifications seriously so dogs, cats, and other abused animals get their day in court.

The law was passed in part because crimes against animals weren’t being rarely prosecuted and frequently dismissed in Connecticut, leading animal abusers to walk away with minimal consequences for their actions. Lawmakers wanted animal abuse to be taken seriously in the courtroom by increasing animal abuse convictions, and that meant dedicating personnel to advocate on behalf of abused animals.

“What I really, really wanted to do was get at those numbers of convictions,” state Rep. Diana Urban (D), one of the law’s sponsors, told the Times. “[Animals are] innocent. They don’t really have a voice, and they are, quote-unquote, a little weaker than you are.”

Connecticut remains an experiment in animal legal advocates, one being watched closely by animal rights activists eager to bring advocates to other states. But for now, animals at least have a friend in the Connecticut legal system.