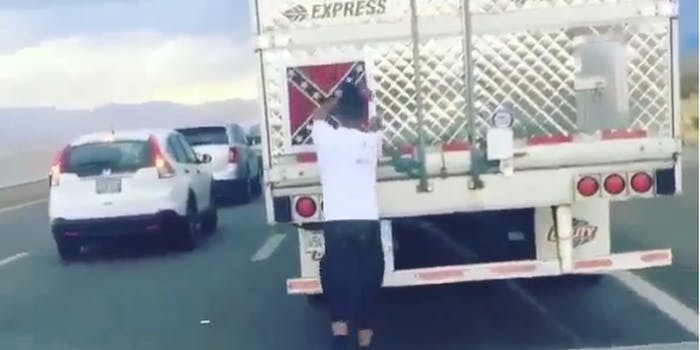 This is how you can tell someone has had enough.

An Instagram video showing a man ripping the Confederate flag off the back of a semi has gone viral overnight on Tumblr.

The man seen in the video is apparently so fed up with the display of the racist icon that he jogs into traffic and takes it down while the truck is still moving.

Instagram user belladreamhair posted the video and added James Brown’s “The Payback” to cap off the man’s moment of exasperated patriotism.

The video promptly racked up thousands of notes on Tumblr, where it was posted with the simple caption “FUCK THAT FLAG.”

We can’t exactly endorse the idea of running into traffic for a cause, but we hope the trucker who chose to display the flag noticed that it was gone—and figured out why.