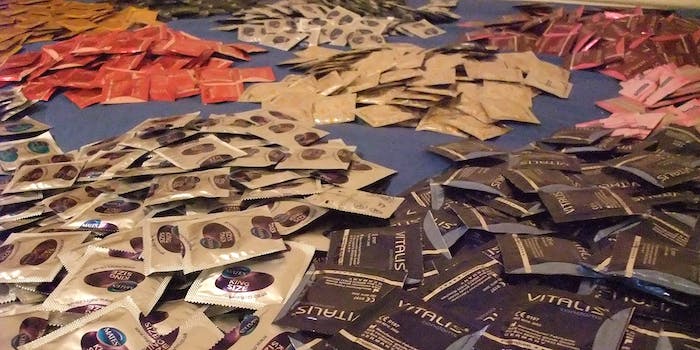 “We’ll leave the state before we wear face masks,” Casey Calvert tells me.

Calvert is an adult performer and writer who’s been nominated for a multitude of industry awards. We’re discussing the new safety standards proposed by the California Division of Occupational Safety and Health (OSHA) and the AIDS Healthcare Foundation (AHF) for the adult entertainment industry in California.

According to many people in the adult industry, the proposal would not only make condoms mandatory, but could also make it an imperative for performers to wear face masks and goggles to shoot their scenes, thanks to the vague language of the bill itself.

In its proposal, OSHA says that such regulations are in place to protect performers from getting any kind of bodily fluids into their face or eyes. But the adult industry is concerned that this would make the videos not only unpalatable, but also unprofitable. That whole “bodily fluids all over the place” thing? That’s a big part of the fantasy that adult entertainment sells.

The whole “bodily fluids all over the place” thing is a big part of the fantasy that adult entertainment sells.

Calvert doesn’t think that OSHA is trying to hurt anyone or the adult industry in general. In fact, she says the agency is trying to do its civic duty by protecting adult performers. But she and many other adult performers like Lorelei Lee, who wrote about the condom mandate in Cosmopolitan, think OSHA’s regulations are both untenable and misguided.

“We would love a regulation that’s in place that really does take into account our concerns and safety,” Lee wrote in Cosmo back in April. “Right now performers are the only ones who know how condoms work on set. No one who makes these laws is coming to our sets and watching what happens.”

“The biggest difference between us and anything else that OSHA deals with in terms of blood-borne pathogens is that we have tested people,” Calvert says.

“We’re interacting with people who have been tested. We know what’s in their blood, and whether or not they have some sort of blood-borne disease or an STI. When you’re working in a hospital and you encounter someone who’s come in from a car crash, you don’t have that information about them, so you have to take all those extra precautions. You have to wear gloves and face masks and all of that because you don’t know. But we do know.”

Furthermore, Calvert says OSHA fails to realize that the adult industry uses an extremely sophisticated HIV test that can show positive results for the virus in two to three weeks, making it much less likely that performers are unknowingly infecting others.

“They take our blood and our urine and they run a bunch of different tests. So there’s not one test that they do that shows all these things,” Calvert tells me. “They run urine for gonorrhea and they do that test. But the blood test for HIV that we use is much, much more stringent than if you went to your doctor to get an HIV test.” (They’re also significantly more expensive: Calvert says that adult performers pay nearly $200 every two weeks to ensure a clean bill of health.)

Calvert thinks that this time, it will be different. “I think that if this passes, the porn industry will go underground,” she says. What she means by that is that the industry will “attempt to skirt the law even more than we do,” by “being very, very secretive about when and where shoots are happening. Being paranoid about the police showing up. You know, people would probably start calling OSHA on their enemies, so to speak, to try and get productions shut down.” In short, a law that’s intended to keep performers safe would have the effect of further putting their lives at risk.

It’s worth noting that many of the concerns about “face masks” and “goggles” are overblown. As Dennis Romero of LA Weekly pointed out in 2013, the OSHA regulations say “personal protective equipment can”—not “must”—”include: condoms, dental dams, gloves, eye protection.” A spokesman for the bill’s author, state Sen. Isadore Hall, told LA Weekly: “The goggle argument is not accurate and is the same old factually incorrect argument folks in the adult film industry have been making for years.”

But Calvert thinks that the involvement of the notoriously porn-unfriendly AIDS Healthcare Foundation (AHF) will change that. “With the AHF’s involvement, because they want us gone, OSHA gets put in this weird enforcing position of enforcing something that they don’t really care about,” she said. “But if the pressure comes from AHF that says ‘Yes, make them wear face masks, yes, make them wear goggles,’ I don’t think OSHA has a choice.”

Calvert also thinks that two other regulations—one insisting that production companies pay for performers’ testing and another mandating training and education for performers—are good ideas, but logistical nightmares. While she’d love for her testing to be paid for, she is skeptical it will ever happen and, she points out, it would lead to more people having her medical and identifying information than she’s comfortable with. Given how stigmatized sex workers are in our society, it’s understandable why she’d be hesitant to place her personal information in the hands of government administrators.

Sometimes, it can even be more frequent than that, because the regulations state that performers can’t use the same condoms “for different anatomical sites.” Or as Calvert puts it, “the condom has to be changed between each hole. So if you want to go from like vagina to mouth or back you have to change the condom.”

The AHF did not respond to a request for comment, but Michael Weinstein, who’s received the most credit for the new proposal, told the Los Angeles Daily News he’s pleased the new ordinances are working their way through the legal system.

“Getting to this point is a necessary part of the process, and we’re pleased that this has been completed,” he said. “The process is designed to give everybody a say. I think it was conducted fairly.”

Photo via Robert Elyov/Flickr (CC BY 2.0)