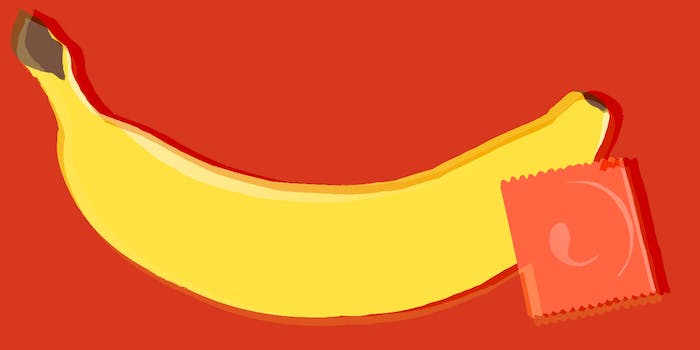 Teens are taking a ‘condom challenge’ on Twitter, but it’s not what you think

In this week’s edition of “The Internet is an endless plain of twisted dreams and surreal experimentation,” Twitter has been taken by storm by a new viral challenge: Instead of ice buckets and disturbingly puffy lips, this time it’s water-filled condoms. In what’s been dubbed the “Condom Challenge,” teenagers the world over are filling prophylactics with water and dropping them on each other’s heads. The actual point of the challenge remains unclear, but it does demonstrate an important truth: Condoms are stretchy AF.

The Condom Challenge appears to have started with a video uploaded from Japan in mid-November, showing one guy dropping a water-filled condom on another guy’s head. Instead of breaking, the condom appears to catch on the boy’s head and then stretch over his face, creating a weird fishbowl effect. It looks like his head is inside the water, but actually the condom-balloon is simply stretched across the front of his face. Eventually the condom bursts and drenches them in water. Hilarious! The video has gone viral, picking up almost a quarter of a million views on YouTube and over 9,000 retweets on Twitter, and inspiring other teens to attempt the same thing.

Imitators of the original duo have met with mixed results when attempting the Condom Challenge themselves. Some are able to achieve the same trapped-inside-a-bubble effect:

While other attempts are… less successful.

I may be outing myself as a joyless old lady who wants to destroy everyone’s happiness, but this can’t be safe, right? I mean, putting a heavy, water-filled, latex balloon (which, as the Guardian points out, can create “airtight seals over your mouth and nose”) over your face seems like a really bad idea. If we’re going to have a random, condom-themed challenge, can’t we have one that doesn’t have the potential to cause asphyxiation or neck injuries? I feel like that’s not a lot to ask. That said, this challenge is still less disturbing to me than the last condom challenge (yes, there is more than one, because the cycle will never end), which involved snorting a condom up your nose and pulling it out of your mouth. Just thinking about it makes my whole body recoil.

Whatever your thoughts about the Condom Challenge may be, we can thank it for demonstrating an important lesson in sex ed: Condoms are very, very stretchy. Many women have heard guys argue against using condoms because “they just don’t fit me.” These videos show that the idea that a condom could be too small for a dude’s penis, when they can easily fit over someone’s head, is ludicrous, and you should not let that excuse keep you from using condoms. (OK, certainly, there can be fit issues with condoms, and a guy might have to experiment a bit to find the right ones for him, but the premise that large enough condoms simply don’t exist is simply not true). And while condoms definitely can break, these videos show that, on the whole, they are pretty darn resilient.