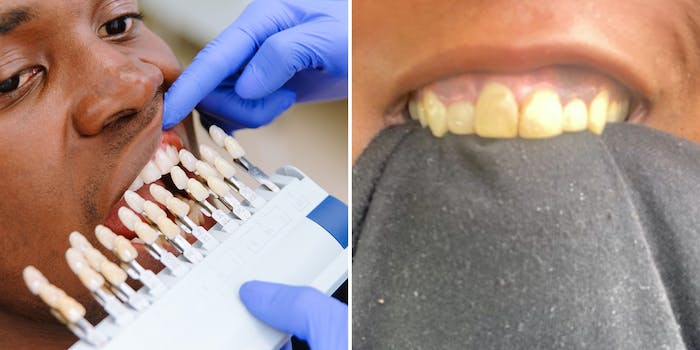 'This took a huge toll on my mental health.'

In a viral Twitter thread, a user breaks down the debacle he allegedly went through for getting “composite veneers” from a woman who claims to have a dentistry background. Twitter user Zooted Spitwell (@Zoo757) uploaded the series of tweets on May 19 recounting the journey that ended up with him having what he refers to as “cheddar biscuit” teeth. She disputes his allegations, and has defended her side of the story on Facebook.

According to his tweets, Spitwell decided to get composite veneers from Essential Grillz, a “teeth jewelry” company in Norfolk, Virginia. The company’s website lists the owner Essense Martin as a certified dental assistant of five years. This, according to Spitwell, led him to believe “she knew what she was doing.”

The Daily Dot was able to use the license lookup public search tool on the Virginia Board of Dentistry website to check whether Martin was listed as a licensed dental assistant. The search yielded zero results for her name or her company’s name.

“I was thinking of getting my top lip removed just so they can see my teeth all the time. I was ready,” Spitwell wrote in one of the tweets.

“But instead I got these. I didn’t even know veneers could come in yellow,” he wrote in the follow-up tweet and attached a photo of the alleged composite veneers. Veneers, according to Healthline, are permanently bonded to existing teeth to improve their appearance.

He claimed that when he asked her to fix them, she told him that he was being “mean.”

“This took a huge toll on my mental health,” he wrote in one Tweet. “She put red lobster cheddar biscuits in my mouth, bruh.”

Spitwell then posted a screenshot of messages wherein he asks for a refund. “We have a no refund policy that you signed on your consent form. The consent form also states that I’m not a licensed dentist which you knew before booking with me,” she allegedly messaged him. She then allegedly accused him of slandering her online and sent him on his way.

Spitwell’s thread gained almost 6,000 likes and 2,400 retweets at the time of writing. Commenters are dragging the woman’s work, with some even placing the blame on Spitwell himself.

“Jokes on you buddy,” one user said to him.

“Doing dental work in a tube top using a ring light as your light source is MAD,” they wrote in the tweet, which now has upwards of 80,000 likes.

“Yes I know it wasn’t smart for me to go to her at all. I was in a manic state at the time and needed a win,” Spitwell wrote in his thread.

While Martin has made her business’ Instagram page private, assumingely due to the backlash, she did allegedly post her side of the story on her personal Facebook account. Another Twitter user posted screenshots of Martin claiming she made it clear to Spitwell that composite veneers do stain.

“He asked me about teeth whitening and I advised him not to get it because he would constantly have to keep up with the whitening to match the composite,” she allegedly wrote in the Facebook post. “He’s a heavy smoker and the oral hygiene isn’t great which causes composite to stain.”

After he came in for “adjustments,” Martin allegedly wrote that she was happy she was able to match the composite perfectly to the rest of his teeth.

She allegedly finished her “storytime” by stating that even if he didn’t like what he paid for, blasting her online and harassing her means she has the right to refuse service as an owner.

“I take my business very seriously I go above and beyond and am always willing to help. I even looked out for him by giving him a $300 discount,” she allegedly wrote in the post. “I have never pretended to be a dentist nor said I was one.”

The Daily Dot has reached out to Martin via TikTok message and her website’s contact form and Spitwell via Twitter message.