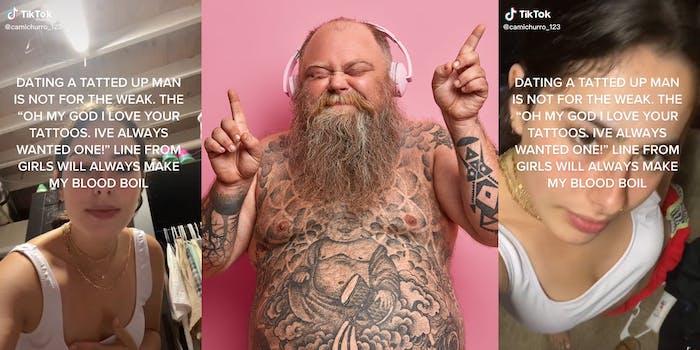 ‘I promise I do not want your man’: Woman’s video about dating tatted person sparks debate

"The 'oh my god I love your tattoos. I've always wanted one!' line from girls will always make my blood boil.”

A debate about tattoos and flirting was recently sparked on TikTok after popular user Camila (@camichurro_123) made a post about other women complimenting her boyfriend’s tattoos.

In the now-viral video, Camila wrote, “Dating a tatted up man is not for the weak. The ‘oh my god I love your tattoos. Ive always wanted one!’ line from girls will always make my blood boil.”

“Ive had a girl try to touch him before to see his tattoos,” she added in the caption.

Viewers in the comments section discussed their own reasons for asking about a stranger’s tattoos, with many noting they did not realize the move was flirtatious.

“I promise I do not want your man, I just want to know where they get their ink done because I don’t know how to find good artists,” one user wrote. “I am so sorry!!!!”

“I feel so bad because I’m a huge artistic person and I love tats so I comment on every cool tattoo I see girls and guys but I never thought of this,” another shared.

Many others shared they had learned a lesson from Camila’s TikTok. “I actually like tattoos and would compliment ANYONES tats,” a user offered. “but note to self NO COMPLIMENTING MENS TATS WHEN GF IS PRESENT got it.”

“This is why I always say ‘dope tats bro’ and keep it pushing,” a second stated. “I love tattoos but never would I want someone to feel uncomfortable.”

Others told their own stories of tattoo compliments.

“My DoorDash driver complimented his tattoos when I was standing there also heavily tatted lmao,” a commenter recalled. “I was sad cuz I already gave her a good tip.”

“The first day I got started on my half sleeve a girl stopped me in the lobby and my girl was standing watching like thanos,” another remembered.

In the comments section, Camila, who boasts 120,000 followers on TikTok, clarified she does not mind when people earnestly compliment her boyfriend’s tattoos. When they have an ulterior motive, however, she noted it can get upsetting.

“Guysss i love my boyfriends tattoos and i know when they are genuine compliments he appreciates it bc its alot of time and money hes put into them,” she wrote.

In a later comment, she added, “Girls Can def tell when you have a good intention!!”

The Daily Dot reached out to Camila via email.