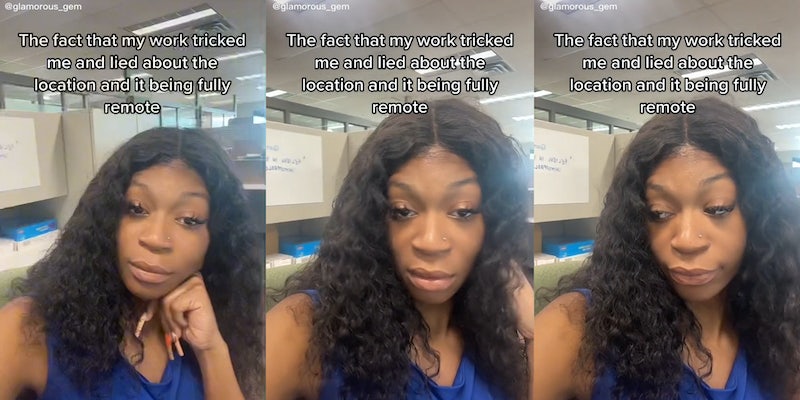 ‘I just quit my job for this new job’: New worker says company lied to her about it being a remote job

'It took an hour to get here this morning. Now they’re saying it’s hybrid.'

A worker on TikTok says she started at her new job to find out it wasn’t as remote as the company made it out to be when she applied.

The eight-second clip features the TikToker Nikkieee (@glamorous_gem) looking upset. The overlay text elaborated on her situation: “The fact that my work tricked me and lied about the location and it being fully remote. I quit my job for this new job.”

The caption revealed what her new job actually expects. “It took an hour to get here this morning. Now they’re saying it’s hybrid -3 days in office FML,” she claimed.

The video was viewed over 132,000 times since it was posted on July 21. Viewers resonating with the video are sharing their similar experiences in the comments.

“Told me I’m remote as soon as I start and I was in the office daily 3 mts in,” one viewer shared.

“We were supposed to be in the office 1 day a week and now it’s 3 days in office. My commute is an hour,” another said.

Other users offered advice on what Nikkieee should do. “Do the bare min while looking for a new job and quit without notice,” one suggested.

With remote work becoming the new norm for many companies at the onset of the pandemic, workers have been leaving their in-person jobs en masse in search of more flexible opportunities. According to Apollo Technical, a study by Owl Labs found that remote workers save 40 minutes a day that would’ve been spent commuting to their offices. Furthermore, workers who get to work from home are reportedly more productive. Apollo Tehnical attributes this, in part, to them having no commute and less distractions that they would have otherwise had sitting in an office.

Sixty-four percent of remote workers, according to CNBC, say they “would consider quitting if asked to return to the office full-time.” In fact, as the pandemic died down, it was reported that some workers did quit over return-to-the-office policies.