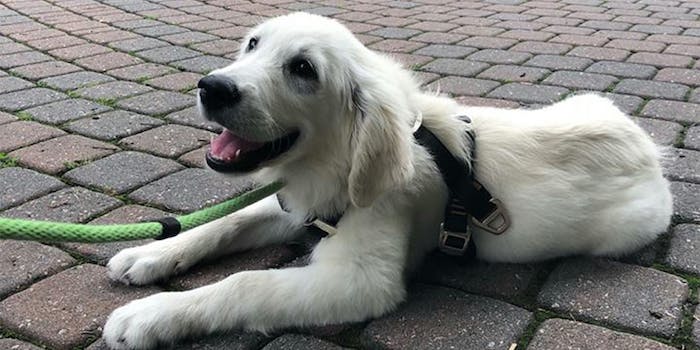 Some are brought by students, some belong to the schools—and all warm our hearts.

College can be a stressful time for anyone. For many young people, it is their first time living away from their parents, and the distance from that safety net can be hard to handle. Not to mention all the new people, classes, and responsibilities. Even for returning students, college can be an overwhelming experience. That’s why many schools are not only allowing students to bring their own emotional support animals, but are also providing campus animals for students to interact with.

oh my god u guys my dorm building has a resident dog and she's the cutest little mini german shepherd and her name is belle :') i love her already

While some schools have resident dogs like Dewey, others have dogs specifically for therapy for students. Therapy dogs receive special training to help emotionally support humans, which helps them stay calm even when the human they’re with isn’t. Dogs like this are a common sight in places like children’s hospitals and elderly care facilities, but college is a tumultuous time too, and dogs are more than happy to provide that same unconditional puppy love to students.

Therapy Dog Charlie visits Justin's residents in his dorm at @myrwu – so important for college students away from home. pic.twitter.com/4lACkqmBN5

Sadie has been having a great time making new friends at @wittenberg University so far and loves saying hi to the peeps who left their furry friends back at home! (dorm life adjustment in progress 😉) #esa pic.twitter.com/O8Jrfyh9F8

Getting settled into my #WayneStateCollege dorm room with my #ESA, Jameson! #SeniorYear pic.twitter.com/w5WKGBffwb

Not everyone is happy about the influx of emotional support animals, though. Some students say the schools aren’t putting in due diligence in cleaning up after the animals in the dorms, causing serious allergic reactions.

the person who lived in my dorm before me owned a cat as an esa. there is still cat fur flying in the air. i am DEATHLY allergic to cats so basically i am dying in my room. sos. pic.twitter.com/XaSpc6pUre

While emotional support animals are important, some schools have a lot of adjusting to do to make sure their facilities are accessible to everyone.