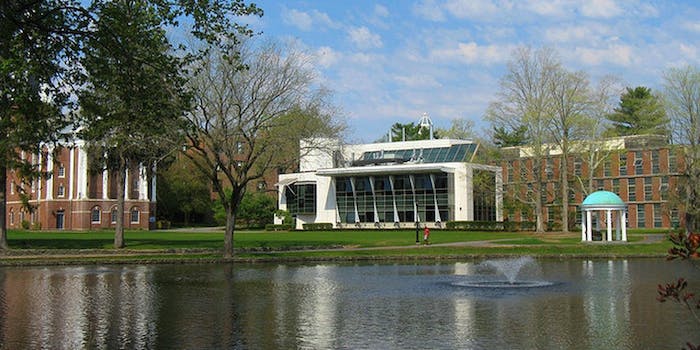 You're not just typing into the ether, you know.

It may only be news to the carefree teenagers affected, but some colleges have begun to gently remind high school students that one’s social media presence can have a negative impact on already perilous odds of admission—and, like many prospective employers, a few have even taken to actively digging up Internet dirt on their would-be incoming class.

At the very least, you can be sure that institutes of higher learning are tracking their own mentions online, as in the unfortunate case cited at the outset of a New York Times report (headline: “They Loved Your G.P.A. Then They Saw Your Tweets.”) on the practice of vetting applicants in part via digital footprint. In this example, a young woman sitting in a campus information session at Bowdoin College tweeted disparagingly about the other attendees throughout, “repeatedly using a common expletive.” Admissions staff noted that she didn’t make the cut academically, but the heinous Twitter account sure didn’t help her case.

Social media is becoming a bigger factor across the board, as an informal survey indicated:

Of 381 college admissions officers who answered a Kaplan telephone questionnaire this year, 31 percent said they had visited an applicant’s Facebook or other personal social media page to learn more about them—a five-percentage-point increase from last year. More crucially for those trying to get into college, 30 percent of the admissions officers said they had discovered information online that had negatively affected an applicant’s prospects.

In other words, the admissions department doesn’t necessarily have to go looking for distasteful Facebook rants or compromising Instagram shots: more often, a high school counselor might alert officers to troubling blog posts or YouTube channels. Even your Google results could be damning. According to Kaplan executive Christine Brown, this mode of research is more prevalent and “less looked down upon” than ever before. After all, it does provide a more complete picture of an applicant, for better or for worse.

Still, this aspect of the decision-making process has yet to be formalized at most colleges, and the notorious fluidity of Internet “facts”—not to mention the potential for name mixups, fake accounts, or misleading context—has some educators worried about relying too heavily on such material. That teenagers today are uploading evidence of their bad decisions at a frightening clip means that the most selective schools will be able to expand their criteria for disqualification. Even worse, many institutions won’t bother to confirm with the applicant what they’ve seen or read online; Colgate is a notable exception, following up on any rejection based on external data.

But Internet appearances cut both ways. Always adapting to the increasingly competitive landscape, prospective students have now taken to scrubbing their profiles of alcohol- and drug-related photos and adopting more innocuous Internet handles and email addresses. As the college admission game continues to evolve, we may find applicants actually enhancing their image to stay one step ahead, the same way one would pad a résumé. It can’t be long now until someone successfully catfishes Harvard.