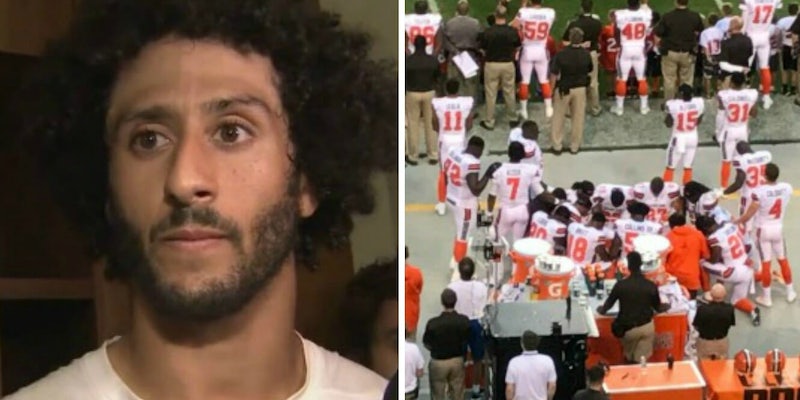 With the quarterback jobless, the social justice baton is being passed on.

Colin Kaepernick still doesn’t have a job. It’s clear the former NFL quarterback who led the San Francisco 49ers to the Super Bowl during the 2012 season has faced severe consequences for his decision last year to exclusively kneel during all pregame national anthems.

Some observers commended him for his bold stance against racism and police brutality—he said all along that he wasn’t going to honor a country that “oppresses Black people and people of color.” And he put his money where his knee was, donating 80 percent of his $1 million pledge to help charities that support women, minorities, military veterans, and anybody else in need.

But many others hated his form of protest. And as the 2017 football season is set to kick off this week, Kaepernick, depending on who you talk to, is either being blackballed from signing with another team or is just not good enough to play in the NFL anymore.

He is now a free agent, reportedly saying he’d stand for the national anthems this year if he lands a job. But so far, that doesn’t seem to matter. The man who has thrown 72 career touchdowns against just 30 interceptions sits on his couch and waits.

Meanwhile, his impact will likely be felt long after he decides he’s done playing football. In fact, plenty of other players are taking up the spot where Kaepernick left off, demanding to be heard by taking a knee or sitting on the bench during the anthem.

Here are five NFL players (plus a dozen more) who could take Kaepernick’s place as the NFL’s social conscience.

Over the summer, after the Seahawks thought hard about signing Kaepernick, Bennett said, via CBSSports.com, “For him to bring up race and politics in sports, I think it struck a lot of people in the wrong way.”

Yet, that won’t stop the Seattle defensive end from using the media or his own Twitter account to express his views. Nor is he shy about protesting. He’s refused to stand during the national anthems during preseason games (you can see him in the video below, wearing the No. 72 jersey sitting on the bench).

As he did previous 2 weeks, Michael Bennett sits during national anthem. As last week, teammate Justin Britt stands at his side. #Seahawks pic.twitter.com/5ko7KG4jT2

Afterward in interviews, he said, “I just want to see people have the equality that they deserve. And I want to be able to use this platform to continuously push the message of that.”

Long known for his clever workarounds for not speaking to the media—not to mention that he’s been a darn good running back for Seattle—Lynch is back in the league after retiring for one season. Now he’s with the Raiders, and he’s not standing for the national anthem, either. Here’s what he said on a recent episode of Conan:

“With what’s going on, I’d rather see [Kaepernick] take a knee than stand up, put his hands up, and get murdered. My take on it is, shit, it’s got to start somewhere, and if that was the starting point, I just hope people open up their eyes and see that it’s really a problem going on and something needs to be done for it to stop. If you’re really not racist, then you won’t see what he’s doing as a threat to America, but just addressing a problem that we have.”

It’s unclear whether Lynch will continue to sit during the national anthems this year, but it wouldn’t be a shock if he did.

#Raiders running back Marshawn Lynch sits during the national anthem prior to #NFL game against Cardinals. @usatodaysports @azcentral pic.twitter.com/OAUOfZ39SH

3) About a dozen Browns players

Cleveland mostly makes national headlines because they’re so very terrible most years, because they are horrible drafters, and because they’re excruciating to watch. But many Browns stood up by kneeling down during a preseason game that happened to be nationally broadcasted.

Woah. A ton of Browns kneeling during the national anthem here pic.twitter.com/Qv6qSPs6kX

As a result, an Ohio Supreme Court justice blasted the “draft dodging millionaire athletes”—a notable response because of his position and because there is no U.S. military draft—but here’s how linebacker Christian Kirksey explained it:

#Browns LB @Kirksey explains why they chose prayer for their method of protest tonight pic.twitter.com/LdRkDmWY6c

The city of Cleveland, however, doesn’t always enjoy its protesting players. When receiver Andrew Hawkins wore a T-shirt demanding justice for Tamir Rice, the 12-year-old boy who was shot to death by police in 2014, the Cleveland police called the protest “pathetic.”

Early in the preseason, Bennett said it would take a “white player to really get things changed, because when somebody from the other side understands and they step up and they speak up about it, it would change the whole conversation.”

A few days later, Eagles defensive end Chris Long put his hand on cornerback Malcolm Jenkins’ shoulder as Jenkins raised his fist in the air during the national anthem.

DeValve, one of the Browns players to kneel during the anthem, is thought that he’s the first white NFL player to do so. DeValve, a tight end, is married to a black woman, and he said that after Charlottesville, he needed to make a statement, in part because he’ll be “raising children that don’t look like me.”

Said Jenkins, via ESPN, “I think it is important to show, especially for a white male to show, that although these problems don’t necessarily affect you, you can still see the significance in it, you can still be in support of your brothers that are going through it.”

The Seahawks cornerback, who has intercepted Kaepernick four times during their careers, has gone out of his way in the past several years to discuss everything from the Black Lives Matter movement to how he believes Kaepernick is being blackballed (ironically, Sherman also sells T-shirts with the #SayLess hashtag).  He’s also quite prolific on Twitter and Instagram. And being one of the league’s best cornerbacks in the past half-decade, fans tend to listen when he talks.

Sport unites us and empowers us to be better, no matter how you look, what you believe or what language you speak. #EQUALITY

Happy to see @L_Bell26 not be bullied into a fluffed up "Long Term" deal. Maybe fans will start to hold the teams accountable.

The NFL season starts Thursday with the Patriots-Chiefs game, and the full slate of Week 1 contests begin on Sunday. As it stands right now, Kaepernick will have to watch on TV.

One anonymous GM told the Sporting News that he was a “distraction” and “I think it boils down to maturity,” and a number of other GMs and coaches told the MMQB that their unease in signing Kaepernick had more to do with his football ability rather than his political stances.

If Kaepernick never plays again, he can cherish the thought that his impact off the field, rather than on it, might be his greatest legacy.

“He had to sacrifice. He spoke up and dealt with a lot of things that were going on—from death threats, people not wanting him in the stadium, people hating him,” Bennett told ESPN. “I think a lot of players were scared of that. Then on top of that, players feeling like he was being blackballed, people were eventually scared … But now, just because he’s out of the league, we didn’t want to lose that message, pushing for liberty and equality for everybody. We just wanted to keep that message alive.”