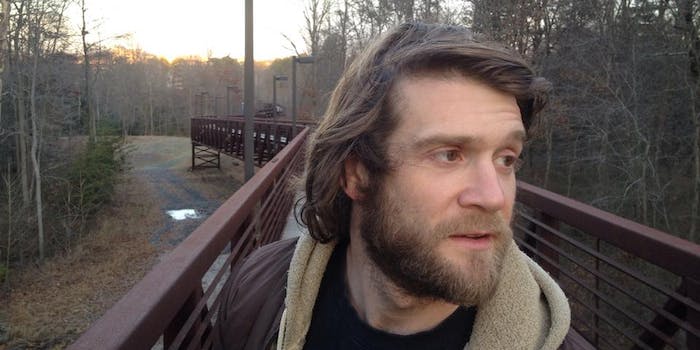 But is he also giving away that epic beard? That's the real question.

In the Bible, Luke 12:33 says, “Sell your possessions and give to the poor. Provide purses for yourselves that will not wear out, a treasure in heaven that will never fail, where no thief comes near and no moth destroys.”

Keller’s spiritual quest/extended art project began a few months ago, after he wrote on his blog that he’d been evicted from his apartment in Baltimore, where he’d lived for nine years. He announced that he was moving his “well-fucked ass” back out West: “I can’t afford to carry my many treasures with me, but I’m happy to share,” he wrote.

To that end, he announced he would be giving away all of his possessions for free:

I’ve initiated a project I’m calling “Everything But Lenin” (a partial pun– dumb– on the sitcom “Everybody Loves Raymond”).  I intend to give everything I own away for free, everything except a large metal plaque of Lenin I bought off the black market in Ukraine thanks to Ebay.  Each exchange comes with a handwritten drawing/document declaring the piece a work of art (both the document and the exchange it represents).  The only thing I ask in return is a photograph together with the object(s) of your choosing.

Although the giveaway period for Keller’s art project ended on May 31, he apparently wasn’t satisfied with limiting his giveaways to just his material possessions—now, he’s giving away his social media presence, as well. Earlier this week, he gave away his Instagram account as well, passing it on to a woman named Dena Jones.

On Tuesday, Jones uploaded a selfie to the account with the caption, “Sorry to disappoint, but I own this account now. Stay if you like, everyone is welcome.” Apparently, however, Keller’s fans didn’t like: the Awl reports that the reaction among his followers was “mad, amused, intriguing, welcoming, rude.”. The response on Twitter was similarly panicked:

WHAT IS GOING ON WITH @colbykeller‘s INSTAGRAM??? not on board

@colbykeller Colby what’s happening? Why you give up from your instagram?

What did happen with Colby Keller’s Instagram user? D:

Colby Keller gave away his instagram and I have no idea why u.u

Keller’s level of notoriety in the gay porn world is such that the fact that he left Instagram is kind of a big deal. It’s like if Beyoncé had announced to her followers she was going to go on a vision quest and take peyote in the woods for a few months, and was leaving her Instagram in the care of Kelly Rowland. We’ve reached out to Keller about his project, and will update if we hear back; in the meantime, his blog and Twitter (NSFW) are still up, so fans can still get their fix of scruffy shirtless mirror selfies.