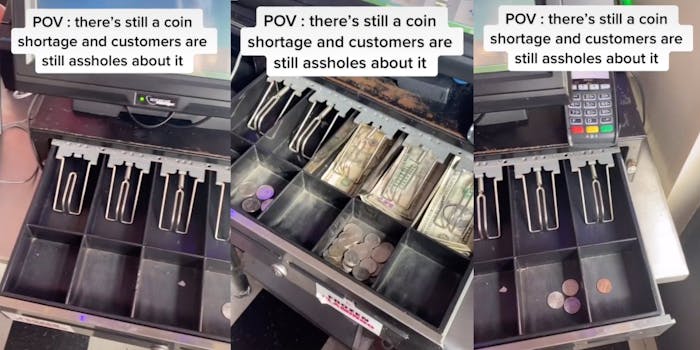 ‘This jack in the box not a bank’: Cashier says customers are ‘still a**holes’ about coin shortages in viral TikTok

'Be nice to your cashiers people!'

A TikToker’s video reminding people about the ongoing coin issues in the United States is resonating with others working service jobs.

Faith Thomas (@thatflamingolady) runs a daiquiri restaurant in Georgetown, Texas, called Frozen Flamingo. And like many other businesses throughout the country, hers has been dealing with a shortage of coins for some time now, leaving them ill-equipped to provide exact change for customers who pay with cash.

The business owner shared a short clip to TikTok showing her register, which had only a handful of coins and several empty trays.

“POV: there’s still a coin shortage and customers are still assholes about it,” reads the text overlay. In the caption, she added a simple reminder: “Be nice to your cashiers people!”

The coin “shortage” has been impacting businesses ever since the brief shutdown early on in the pandemic, which hurt circulation.

Last June, the Federal Reserve released a statement saying it was “confident that the coin inventory issues will resolve once the economy opens more broadly and the coin supply chain returns to normal circulation patterns.”

So there reportedly isn’t a problem with the number of coins in circulation—they just aren’t circulating.

Regardless, it’s apparently having the same impact on businesses as would an actual shortage, and leaving customers frustrated at the lack of options when it comes to completing transactions.

And cashiers, unsurprisingly, tend to bear the brunt of those frustrations.

“They go ‘you work here u should have change’ and im like ‘girl this jack in the box not a bank,’” @lilsofa commented on Thomas’ video.

“A lady accused me of stealing from people bc we don’t have change,” @tanya.riesy wrote, while @stoopidmoth noted that “someone took pictures of me to send to corporate bc i didn’t have 35¢ and i asked if they’d like to just round it up and donate it.”

One viewer even admitted she “used to ask for change for a dollar from each car” in the drive-thru.

Fortunately, Thompson says her own customers have mostly been understanding, and that only a handful have left over the lack of coins.

But the most important message here is ultimately what she said at the start: “Be nice to your cashiers.”

“As a small business, there’s genuinely nothing we can do,” she told the Daily Dot. “People shouldn’t blame the cashier or manager on duty.”