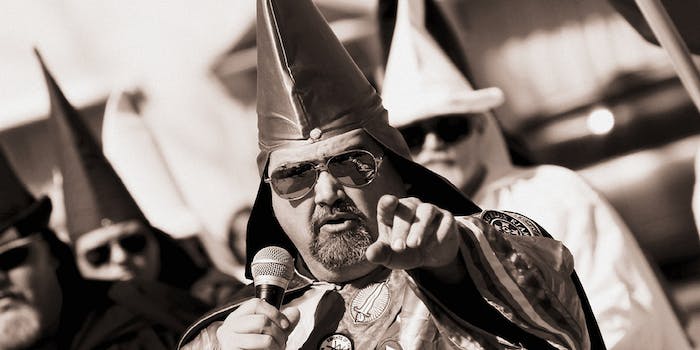 CNN, bastion of hard-hitting journalism and obnoxious holograms, is at it again, with a question that surely presses at the forefront of everyone’s mind: Can the Ku Klux Klan rebrand?

As in, can one of the most nasty, hate-fueled, murderous groups in American history reveal its softer side? Can it make us forget that its members have killed thousands of people over the years—including last week’s murder of three people at a Jewish community center near Kansas City, allegedly committed at the hands of a former KKK grand dragon?

Speaking of which, perhaps a first step in this branding effort is to rename KKK leaders after something other than a mythical hell-beast. Just a thought.

Not only did CNN pop the big rebranding question, they interviewed “top marketing experts, brand gurus and historians” to find their answer. That’s right. Brand gurus.

“They stand for hatred; they always have,” brand guru Laura Ries told CNN.

“Maybe they don’t believe in shooting up a center for Jewish people, but they still support beliefs that are beyond the scope of understanding for most people and certainly the freedom and equality our country believes in.”

After kicking off with one of the most discombobulating ledes in journalism—”Pointy hats, white robes, crosses burning, bodies hanging from trees.”—CNN upped the ante: “Other experts raised the question: If the Klan isn’t violent, what’s the point?”

What’s the point of this article? That’s what readers want to know.

Can the Klan rebrand? http://t.co/GGmr2UpfEA Are you fucking kidding, CNN? What in the actual fuck…

CNN isn’t as bad as people say. I mean, it’s not like they’re publishing articles about how to turn around the KKK oh http://t.co/hUJZn8neP9

.@CNN DISBAND. I believe you meant to ask if the KKK can disband.

Others ignored the absurdity of rebranding a hate group as something a bit less, you know, murder-y, and took the proposition at face value:

I don’t get the controversy here. Organizations have brands, and work to change them when they want to grow. http://t.co/CPM8ZzdwUX

“Can the Klan rebrand?” RT @ryanlcooper: Very bad headline, but this is actually a really interesting piece http://t.co/tJBa1DKf87

I’ll be honest, I don’t really get the CNN outrage. The article is couched slightly weirdly, but talking about a KKK schism.

What we need is a scalable, venture-backed racism capable of leveraging social media. http://t.co/BX7CxWx02z

OK, that last one was a joke. Like this CNN article.