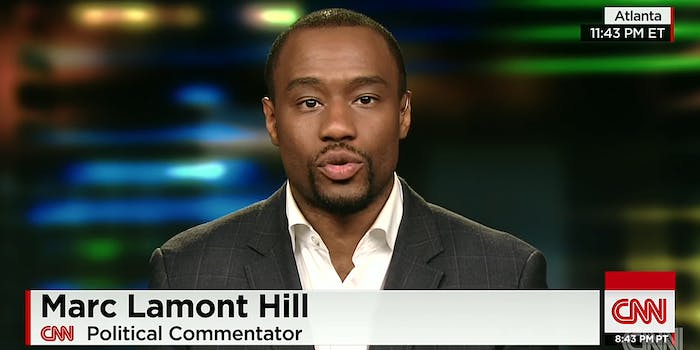 Many were particularly offended by his remarks of 'from the river to the sea.'

Author and CNN commentator Marc Lamont Hill was dropped from the network following comments he made at a U.N. event, calling on Israel to support the rights of the Palestinian people.

CNN confirmed the termination of his contract in a statement.

Hill, also a professor at Temple University, spoke in New York on Wednesday at the U.N.’s Committee on the Exercise of the Inalienable Rights of the Palestinian People, in anticipation of the International Day of Solidarity with the Palestinian People. He said he just arrived from Palestine, where he was “boycotting Israeli water.”

“We must prioritize peace, but we must not romanticize or fetishize it,” he said, “We must advocate and promote non-violence at every opportunity but we cannot endorse a narrow politics of respectability that shames Palestinians for resisting, for refusing to do nothing in the face of state violence and ethnic cleansing.”

But it was his concluding remarks to “free Palestine from the river to the sea” that received flak on social media. Many saw it as a reference to the boundaries of the Jordan River to the Mediterranean Sea and called it anti-Semitic rhetoric that’s reportedly used by fundamentalist group Hamas calling for the elimination of Israel.

In a series of tweets, Hill responded to the criticism, saying the interpretation of his reference to “from sea to the river” was misleading.

“I support Palestinian freedom. I support Palestinian self-determination. I am deeply critical of Israeli policy and practice,” he tweeted. “I do not support anti-Semitism, killing Jewish people, or any of the other things attributed to my speech. I have spent my life fighting these things.”

I do not support anti-Semitism, killing Jewish people, or any of the other things attributed to my speech. I have spent my life fighting these things.

Many supported the move by CNN, believing his speech was anti-Semitic and pointing out his relationship with controversial figure Louis Farrakhan.

Thank you @CNN for doing the right thing. This sends a powerful statement that antisemitism will not be tolerated.

It's about time establishment media take a stand against the dangerous strand of rampant anti-Semitism on the left masquerading as "policy."

This is a good move.

He's also used his @CNN platform to oppose funding for Israel's Iron Dome air defense system—which does nothing but shoot down rockets fired at Israeli towns—because it "takes away all of Hamas's military leverage," saying, "that, for me, is the problem." https://t.co/D0y8UebP3v

If your social justice involves using slogans that call for the genocide of half the world’s Jewish population you’re no ally for justice. https://t.co/SQEXba2Ydb

CNN's firing of Marc Lamont Hill over his Israel/Palestine speech is a major victory for “online call-out culture” but a major defeat for the right to advocate for Palestinian rights, to freely critique Israel, and for journalism and public discourse to accommodate dissent. https://t.co/FA9oOgxz3H

THIS is what @CNN fired @marclamonthill for, calling for a free Palestine.

The truth is, Israel is neither committed to a peace process nor intends to ever pull out of the territories. The transience of the occupation is a lie.#FreePalestine pic.twitter.com/7TQD9CVeh4

Criticizing the actions of Israel is not anti-semitism. Since when is advocating for human rights a fireable offense? Join us in standing in solidarity with Dr. @MarcLamontHill: https://t.co/5Sd3b1qdBK

IfNotNow, a movement by young American Jews calling for an end of the Jewish “community’s support for the Israeli occupation,” initiated a petition to get Hill his contract back. The petition had reached 1,515 of its target 1,600 signatures as of this posting.

Because standing up for Palestinian freedom is not antisemitic. And in the Trump Era, with rising white nationalism, to make that mistake is dangerous.

However, it’s unclear if Hill would take another contract if offered one as a result of the petition. On Thursday, he stood by his statement.

My reference to “river to the sea” was not a call to destroy anything or anyone. It was a call for justice, both in Israel and in the West Bank/Gaza. The speech very clearly and specifically said those things. No amount of debate will change what I actually said or what I meant.