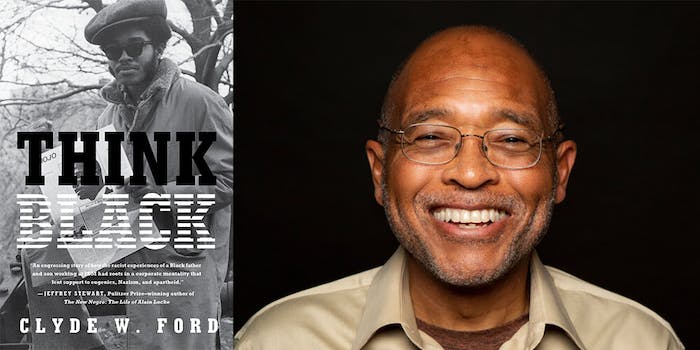 Clyde W. Ford says tech and race have an ‘ugly history.’ What does that mean for the future?

History’s greatest minds have all been wary of mankind’s future with technology. From fears of an automated workforce where humans are completely phased out and replaced with robots to gloom and doom theories about artificial intelligence taking over the world, dystopian theories abound.

A common theme in these imagined futures is that humanity’s future will become even more precarious as tech evolves. But what is often left out of these stories is the role racism will play in that evolution. Clyde W. Ford is among those great minds with many thoughts on what the future of tech will look like. He is especially concerned about how Black people and minorities will fit into it.

But these days, Ford is more alarmed by tech’s past—and people’s ignorance of it. He cited, for example, Amazon’s proposal last year to sell facial recognition technology to Immigration and Customs Enforcement.

“Technology and race have an ugly, intertwined history,” Ford told the Daily Dot via email. “When Amazon recently proposed selling Customs and Border Patrol facial recognition technology to make it easier to determine who should and who shouldn’t enter this country, Amazon stepped into a long lineage of companies using technology in support of human rights abuses.”

This ugly history, Ford says, reveals the “dark side” of tech that is too often buried and obscured. And it has serious implications for the future of humankind, the evolution of our technology, and ultimately who it will serve to empower.

While conducting research for his recently released book Think Black, Ford uncovered damning truths about various technology companies, especially IBM, where he spent decades of his life working as a software engineer. Ford’s father, John Stanley Ford, was the first Black software engineer hired to work for the company—by Thomas J. Watson himself— in 1928 when the industry was (even more so) white, male-dominated, and overtly racist. John Ford endured at the company for 37 years and quietly fought the “good fight,” Clyde Ford said, hoping to pave the way for future generations to have greater opportunity. Ford followed in his father’s footsteps, but he was hellbent on making one thing clear: He was not going to be as quiet and docile as he imagined his father was.

“I’d just seen the film Shaft, with Richard Roundtree, the night before my first day at IBM. I had a huge Afro and porkchop sideburns,” Ford said. “I wore a blue zoot suit with red pinstripe and a bright red turtleneck underneath that. I had on high-heel, patent-leather, platform shoes. I knew I was being provocative walking into IBM that way, but I wanted to send a message to everyone I encountered, from my manager to my co-workers, ‘I may be a second-generation IBM employee, but I’m nothing like my father.’”

“When I came across Edwin Black’s best-selling book, IBM and the Holocaust, I was both thrilled and saddened,” he said.

In his bombshell 2001 bestseller, Black documented in great detail every aspect of IBM and Watson’s involvement in the Holocaust. The tech giant was largely responsible for much of the automation that allowed for Adolf Hitler and the Third Reich to round up, intern, deport, enslave, and exterminate millions of Jewish people and others branded as “undesirable.”

“As I read through that book, at times I had to put it down because I felt like vomiting or crying. It was so hard to understand why Watson and IBM put profit ahead of people,” Ford said.

As Ford began to dig more, he said, he recognized participation in and profiteering from the Holocaust was not the first or last racist business move the tech giant would make. Eventually, he discovered a hidden thread of racism that weaved together the company’s history. Traces of it could be seen in IBM’s alleged involvement in the development of South Africa’s Apartheid System in 1945, when the company provided the vast majority of the computing power that allowed for the creation of a computerized population registry. The registry depended on IBM hardware to keep records, which included data on “racial classification,” and facilitated the control and exploitation of South Africa’s black populous. (In 2016, the U.S. Supreme Court rejected an appeal that would have revisited litigation to hold IBM accountable for actions related to apartheid in South Africa.)

Ford also alleged the company supplied the Eugenics Record Office with punch card formats and machines to conduct a wide-scale study of mixed-race individuals on the island of Jamaica. The Jamaica study, initiated by eugenicist Charles Davenport and funded by the Carnegie Institution of Washington, compiled hundreds of physical measurements and psychological tests on 300 Jamaican adults and sought to identify mixed-race Jamaicans for sterilization in 1928. It was the first time machines helped organize information on such a large scale, and it was for the purpose of promoting and executing a white supremacist agenda.

The implications were profound and led Ford to view both his and his father’s employment at IBM quite differently. While he long thought of his father as the Jackie Robinson of the tech world, he eventually began to question why Watson offered his father the job all those years ago. He theorizes the move was meant “to divert attention away from some of the very nefarious business dealings of the company.” Ford believes Watson, like a “skilled sleight-of-hand magician,” decided to get the public focused on IBM hiring Black man and a handful of Jews rather than its huge profits from Nazi banks after the war.

“Better have the media and the public focus on IBM ‘breaking the color-line’ in high-technology, than in their active support of eugenics and the Holocaust,” Ford explained. “[Watson] didn’t want close scrutiny of the millions and millions of dollars he and IBM made in support of Hitler.”

To this day, IBM has remained silent on its pivotal role in the Holocaust.

And though Ford will never truly know the reason why his father was hired all those years ago, he is still forced to come to terms with IBM’s treacherousness and the racist abuses it enabled. That great reckoning has colored Ford’s view of the entire tech industry, which he asserts continues to be rife with racism that requires active efforts to root out.

He pointed to various examples of how racism has infiltrated modern technology, including the Lower Manhattan security project in the early 2000s that placed CCTV cameras all around New York without the knowledge of New Yorkers. The info acquired by the project was used to refine technology to identify people by race.

Ford also spoke about the work of Safiya U. Noble, an associate professor at the University of California Los Angeles, which uncovers the ways that hegemonic, racist ideologies powered search engine results. For example, in the early 2000s, a Google search of the words “Black girl” resulted in mostly pornographic results. And the AI chatbot “Tay” released by Microsoft had to be shut down after less than 24 hours of operation because exposure to Twitter conversations led the bot to learn and repeat antisemitic, misogynistic, and inflammatory messages.

“Even the best-intentioned products can have the worse effects,” Ford explained, citing a Danish company’s controversial “Slave Tetris” game. “The company claimed they were releasing a product which would educate people about the Atlantic Slave Trade. That’s a good thing. But packing slaves into a slave ship by playing a Tetris-like game trivializes and diminishes the actual impact of the Atlantic Slave Trade on those humans who were captured from Africa and shipped in shackles to the Americas.”

After pushback and outcry, many of these racist tech flubs have been addressed in the media or through litigation. But Ford says they should’ve never occurred in the first place. He also thinks it is the tech industry’s responsibility to root out the racism that has pervaded the industry for so long. The only way to begin to do so is through education and breaking down the barriers that have long barred people of color from access to the industry.

“Beyond knowing the history of technology and racism, recent studies place the percentage of Black men in the high-tech industry at less than 2% and Black women at less that 1% and those studies show it’s not a ‘pipeline problem’,” Ford said. “Qualified candidates can be found if high-tech firms look for them. These same companies should invite qualified minorities and people of color onto their boards of directors.”