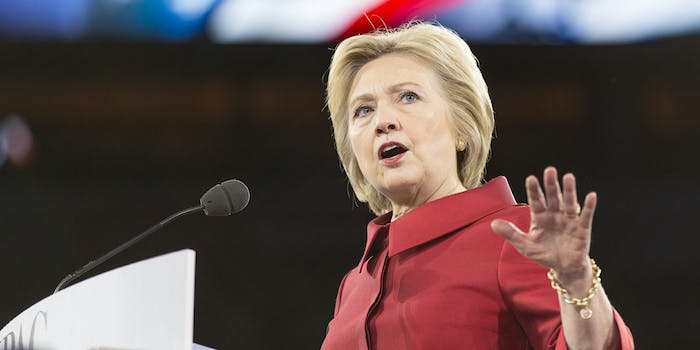 The staffer was her 'faith adviser.'

Hillary Clinton requested to keep a senior staffer who had been accused of sexually harassing a subordinate during her 2008 presidential campaign, according to a new report.

Clinton asked for Burns Strider to stay on the campaign despite calls from her campaign manager to fire him, the New York Times reports, citing “four people familiar with what took place.”

A 30-year-old woman who shared an office with Strider said he rubbed her shoulders inappropriately, kissed her on the forehead, and sent her “a string of suggestive emails,” sources told the news outlet.

A complaint was taken to the 2008 campaign manager, Patti Solis Doyle, who urged Clinton to fire Strider. Strider was instead ordered to undergo counseling and was docked several weeks pay, according to the report. The woman who made the complaint declined to comment to the Times.

Strider was Clinton’s faith adviser and sent her scripture readings every morning for months during the campaign.  The Times reports that Strider was hired to lead Correct the Record, a group that supported Clinton’s 2016 presidential campaign.

A spokesperson for Clinton provided a statement from the law firm that represented the campaign in 2008.

“To ensure a safe working environment, the campaign had a process to address complaints of misconduct or harassment. When matters arose, they were reviewed in accordance with these policies, and appropriate action was taken,” the statement said. “This complaint was no exception.”

Lilan Adams, 19 at the time, said she joined Clinton’s campaign in 2015 and worked with the Colorado Democratic Party as a paid organizer. Adams said she faced harassment for “months” from a fellow organizer. The harasser was fired after she approached her supervisor for a second time, but was rehired to work for the campaign in another state.