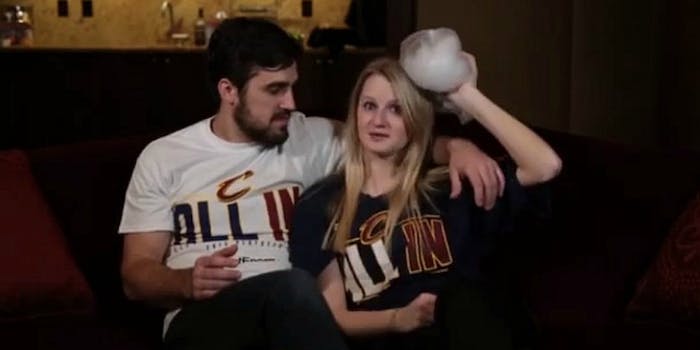 Did this promotional video for the Cleveland Cavaliers make light of domestic violence?

The Cavaliers promotional team needs to be smarter than this.

In the middle of Wednesday night’s playoff game between the Cleveland Cavaliers and the Chicago Bulls, the giant screen in the Quicken Loans Arena showed the following disturbing commercial.

Apparently, the video was a parody of this United HealthCare commercial which features a woman falling through a table (and not being thrown or pushed).

To those in the arena, though, the commercial was, well, strange—particularly if you didn’t know that it was supposed to be a humorous spoof of another commercial.

Strangest thing of night: when videoscreen showed skit of a guy in Cavs gear throwing girlfriend across room until she removed Bulls gear.

As you can probably guess, there are some problems with the Cavaliers video. Take, for example, this image. 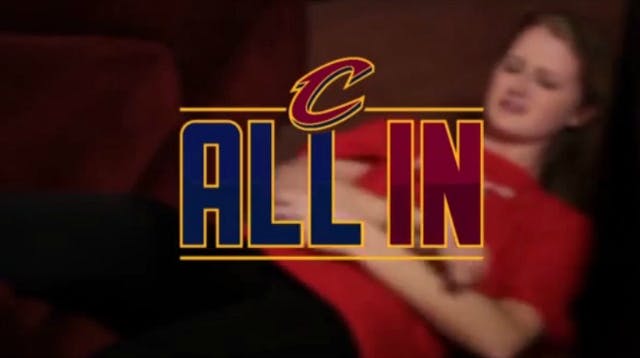 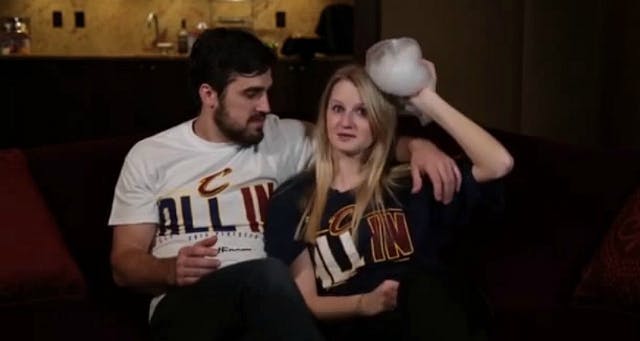 Consider also the fact that the woman who’s been thrown across the room basically takes the blame at the end.

I’m sure the Cavaliers video staff didn’t see the parody as harmful in any way, but in this day and age, the optics of a woman taking a beating aren’t good for any business, least of all a professional sports franchise whose players are regularly arrested for exactly this heinous crime.

Perhaps that’s why the original video on Vimeo was deleted early Thursday morning.

Of course, not everyone agreed that the video was disturbing. Some people thought we should all lighten up a little.

This is fair, but there’s a reason we don’t see many jokes about a husband making a fist and threatening to send his wife to the moon on primetime TV these days. Times change, and certain topics become more or less funny and more or less appropriate.

The Cavaliers obviously didn’t believe they were making a domestic-violence joke—just like the Houston Rockets didn’t think they were advocating killing a horse in emoji form—and it would certainly be an overstep for somebody to be fired over this mess. But that doesn’t mean the organization shouldn’t have known better—or that they can’t learn from this incident.

A quick tip for the future: laughing at a woman cowering on the floor in pain in an attempt to sell tickets to a basketball game isn’t funny at all.