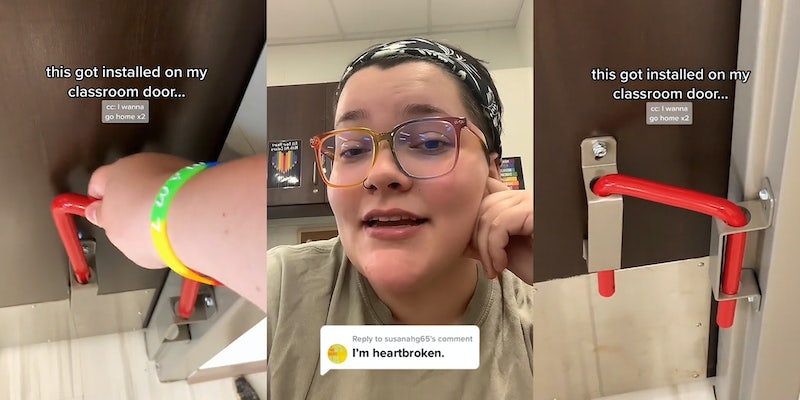 ‘Not complaining that we got a new safety measure; I am just upset that *this* is the solution’: Teacher shows new door lock to protect against shooters

'Very excited to explain this to my kids.'

A teacher on TikTok showed a barricade-style lock installed on her classroom door to protect active shooter threats.

“Very excited to explain this to my kids,” User Madi (@notsocoolmads) wrote in the caption of the July 23 post.

The video, which has been viewed more than 4 million times by Wednesday, shows the extra lock that was added to the inside of Madi’s classroom door to act as a barricade against a potential safety threat from outside.

“This got installed on my classroom door,” Madi wrote in a text overlay. The video was put over an audio clip that said, “I wanna go home.”

In the video, Madi shows how the lock is activated. A rounded metal bar is placed through a hole in backing plates that are attached to the inside of the door and the door frame, respectively.

After going viral, Madi clarified in the comments that the post was not intended to be a complaint, rather, she said, she is “upset that *this* is the solution.”

Many commenters called for policy change in the wake of recent school shootings.

“Anything but sensible gun control policy,” one person wrote.

“They’ll do everything except ban guns,” another said.

According to data from Everytown Research, there have been at least 95 incidents of gunfire on school grounds across the country this year, resulting in 40 deaths and 76 injuries.

Many schools nationally have increased security measures in light of recent incidents, such as the May shooting at Robb Elementary School in Uvalde, Texas.

Several commenters expressed outrage at the need for protection against firearms in schools.

“Schools and teachers and kids deserve better than this,” one commenter said.

“I’m heartbroken,” another wrote, to which Madi responded with a follow-up video.

“This is not a perfect solution,” Madi says in the video. “There are other things that need to be done.”

Addressing commenters who provided other safety suggestions, Madi clarifies that, between having an on campus police officer as well as having an always locked door policy, her school has many security measures in place.

“To the person that said I should get an administrator certification and fix it: It’s not the administrators’ job. It is the legislators’,” Madi says.

Even though she says she is only going into her second year of teaching, and thus, second year of undergoing such measures, Madi says shootings have been an issue since she was in school. She is calling for legislators to introduce policies to help prevent such incidents.

The Daily Dot reached out to Madi via TikTok comment.