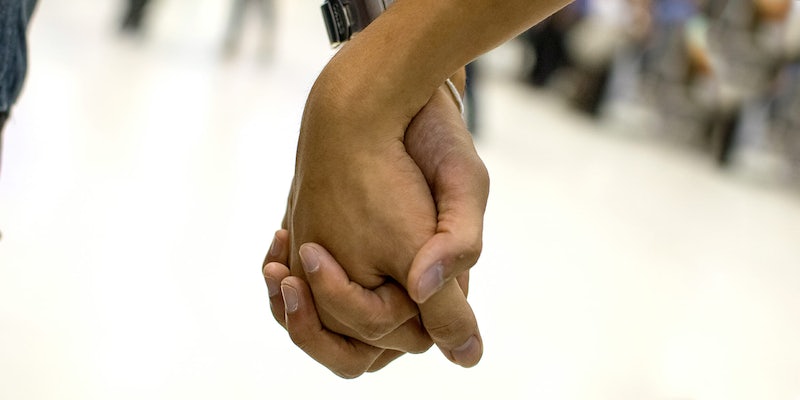 Should cis straight people call their significant others ‘partner’?

Some say it’s appropriation, others say it normalizes gender-neutral language.

LGBTQ Twitter is up in arms over whether straight people, or even bisexual people dating different sex partners, should use the term “partner.”

It started with a since-deleted tweet on Monday, which said, “the gender neutral word ‘partner’ has really been hijacked by ‘progressive’ women who don’t want to admit the fact that they are actually dating the white cis het dudebro they’ve been loudly railing against their whole ‘woke’ lives.” Since then, a serious debate has ensued, with people all over the gender and sexuality spectrums weighing in on why they do or don’t use the term.

For some, cisgender and heterosexual people calling their significant others “partner” is actually a good thing. They say it helps to normalize the term, making the world a more gender-neutral place that’s easier for non-binary people to navigate.

However, others say that these frustrations are valid, and point out that queer spaces have to be kept safe for the people they’re made for. They feel that cis straight people using “partner” is taking something special away from queer people.

when trans women raise legit concerns about cis bi femmes who have transphobic racist cis boyfriends who they call ‘partner’ and bring into qt spaces, please listen before flying off the handle about your own erasure.

Partner is the gender neutral term for boyfriend/girlfriend. It’s for gender queer people. Please save ur hot cis takes. Get engaged or use significant other. Let us have one thing

Still, others feel the discussion is the LGBTQ community subtly attacking queer women and erasing non-binary people who aren’t currently in same-sex relationships.

this partner convo has me mad uncomfortable as a sometimes (I think?) cis passing nb with a cis (not straight!) boy partner :)

How people define their relationships is a very personal and complicated choice. It can depend on gender, sexuality, the length of the relationship, whether the relationship is polyamorous or monogamous, and other things as well. For this reason, the Daily Dot spoke to several members of the LGBTQ community to get their perspectives on why they use the word partner.

“One of my partners is non-binary so the term boyfriend or girlfriend doesn’t really suit them,” says Ally, who identifies as pansexual. “I have also found it to be a good way to talk about someone I’m seeing without having to come out.”

Daily Dot contributor Ana Valens agrees that “partner” is a great catch-all term for identities or statuses that don’t need overexplaining. “I sometimes explain our polycule setup by using the word ‘partner’ or ‘dating’ because I think it makes our open relationship easier to comprehend for others. Beyond our poly status, [my partner] and I use ‘partner’ interchangeably with ‘girlfriend’ a lot to describe our setup,” she says.

Others say that “partner” simply makes sense: You and this other person are working on something together.

“I like the term partner because that’s what [my spouse] is to me,” said Amanda, who is non-binary and whose partner is bi. “He’s a constant figure in my life who supports me, as I support him, through everything life throws our way. The term husband has a lot of gendered baggage, wife even more so, that I’m not super interested in inviting into our home.”

Noel said when they opened up about their fluid status, their partner “wanted to make sure that it didn’t hurt me to use a term of affection,” so they came up with “partner.” “It is really indicative of our relationship, we’re in it together.”

When it comes to straight, cis people using the term, reactions are mixed but mostly lean “not greatly offended” and “you do you.”

“I think the word itself really helps queer individuals, but I’m not seeing a benefit for cishet people really,” says Jake, who identifies as gay. “As far as determining who in the LGBTQIA+ community can use it, such as bi people in relationships with different sex partners, I think anyone in the queer community should feel free to use it how they do or don’t want to.”

“I’ve seen queer people use ‘partner’ as self-protection from outing themselves to strangers or co-workers, so thinking of it that way, it’s actually helpful for cis-straight people to use ‘partner,'” says Daily Dot editor Kris Seavers. “It adds layers of protection of people who might not feel comfortable revealing the gender of their significant other. On the downside, when cis-straight people use ‘partner,’ it blurs what might otherwise be a coded identifier for queer people. It’s complicated.”

Ally and Kenny, on the other hand, think “partner” is just a more inclusive term for all, even the heteros. “It helps people normalize the term because, really, if it fits for you, then use it. If boyfriend/girlfriend don’t feel right, then use partner,” Kenny says.

“We’re all out here trying to figure out what configurations, language, and phrases work best for our own romantic and sexual experiences, so it makes absolutely zero sense to police other people and tell them how they should/shouldn’t describe themselves,” Ana adds. “Furthermore, I think a lot of queer women are attacking other queer women over this. Notice how it’s not cis men being put under the microscope, but straight and straight-passing women?”

From my own perspective, I see “partner” as not only capturing the seriousness of my relationship but also as a good way to reflect my non-binary identity. Debates like this always give me pause entering into queer spaces, wondering how I (and my relationship) will be perceived by others there. I sometimes worry that I am simply moving from one judgemental environment to another, going from too visibly queer to not visibly queer enough. Though there’s an intent to protect spaces for queer and trans people, it may end up making those spaces less accessible to those who are straight or cis passing.

While overall the LGBTQ community seems open to straight and cis people calling their significant others’ their “partners,” the debate continues. “This feels, more than anything, like something cis straight couples can learn from the queer community,” Amanda says.

The hope for many in the community is that they can increase inclusivity, without sacrificing queer-only spaces.