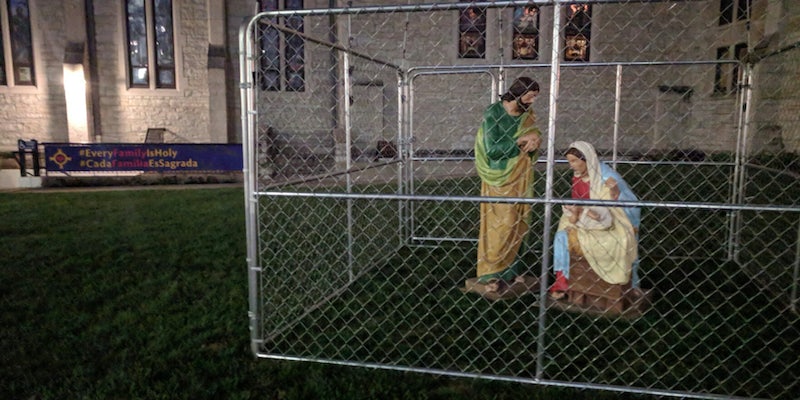 The church's dean said Mary, Joseph, and Jesus were 'a homeless family with nowhere to stay.'

On our lawn tonight we placed The Holy Family…in #ICE detention. #Immigration pic.twitter.com/eSkTv89SEf

The display is accompanied by a sign that says #EveryFamilyIsHoly and its Spanish translation, #CadaFamiliaEsSagrada. Fox59 reports that officials at the church have been vocal about their opposition to Trump administration policies that separated immigrant families at the U.S. border.

“We pray for those families separated at the border. May God protect them and watch over them.” Our prayers today. #Episcopal #Immigration

“We heard a lot of the Bible quoted, people trying to say what scripture justifies and doesn’t justify,” Stephen Carlsen, dean of Christ Church Cathedral, told Fox59. “Our tradition, our sacred traditions, are crystal clear. People who come to us for safety, for refuge are just like everyone in our families.”

Carlsen also related the holy family to modern day refugees to RTV6, saying Mary, Joseph, and Jesus were “a homeless family with nowhere to stay.”

Holy Family #Detention: Indy's @CCCathedralIndy puts Joseph, Mary & Jesus inside a fence on its lawn. When asked how long the display will remain, Dean @Steve_Carlsen said "My greatest hope would be that we, our nation, will search its heart & say this is not who we want to be." pic.twitter.com/AgcOZv4xSz

“The fact that it’s controversial isn’t because I want to be controversial,” Carlsen said. “What’s controversial is that we are turning away from the values that should be guiding us. The point of a religious icon is to move our hearts, and if at first people are upset by it, that might just be God trying to move their heart. And I hope their hearts soften.”

Trump signed an executive order on June 19 stopping his administration’s enforcement of a policy that separated immigrant families at the border. But 2,300 children had already been taken from their parents, and no plan was in place to reunite them.

The New York Times reported that family members are being forced to pay hundreds or even thousands of dollars to sponsor migrant children. Meanwhile, the Trump administration has said it will detain immigrant families indefinitely.