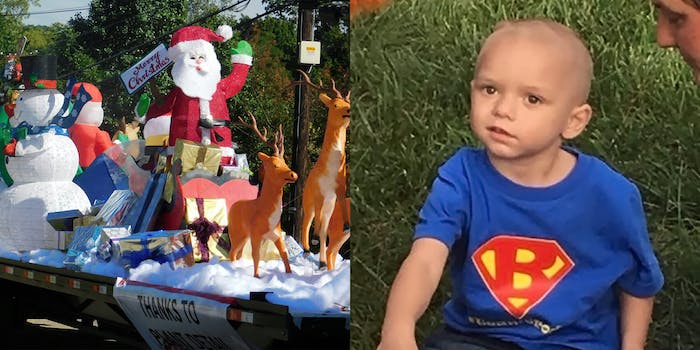 Christmas was the toddler's favorite holiday.

When 2-year-old Brody Allen’s parents got the news that their son had two months to live because of brain cancer, they had an idea to make his last days his best: by celebrating his favorite holiday, Christmas, in September.

Initially, it was just the Allens decorating their home in Colerain Township, Ohio, but neighbors in their cul-de-sac soon joined in, pulling out their Christmas decorations, too. News of Brody’s illness continued to spread, and people began bringing the Allens more Christmas decorations and presents. Some days, the family says they receive more than two dozen Christmas cards.

The early Christmas celebration culminated on Sunday with a parade for the young boy. Although the main theme of the parade was Christmas, the goal was just to give Brody a wonderful day. People also participated in the parade in superhero costumes.

What a way for the Colerain community to support such a precious child! God bless you, Brody!#TeamBrody! pic.twitter.com/4zoyK3WRj0

Colerain is filled with holiday cheer! A parade for #TeamBrody is set to start at 4pm. Folks are decked out in some awesome holiday decorations and outfits. Even the dogs are getting in on the fun! @WCPO pic.twitter.com/WLn1NRdOZe

Many who weren’t otherwise dressed up for the occasion wore Team Brody shirts, with a Superman-inspired “B” logo for Brody. The Allen family led the parade in their Team Brody shirts and capes, greeted by the cheers of their community. Hundreds of people showed up in support.

The family started seeking treatment for Brody in May when he complained of dizziness. They told the New York Times that four tumors were found then, and learned the aggressive brain tumor had been with Brody since birth. He was too small for radiation treatment, and aggressive chemotherapy did not slow the growth of the tumors, or stop a new one from developing.

When it became clear that treatment was not going to help, the family began planning their Christmas in September. However, they were completely unprepared for how many people in their town would support and celebrate their son.