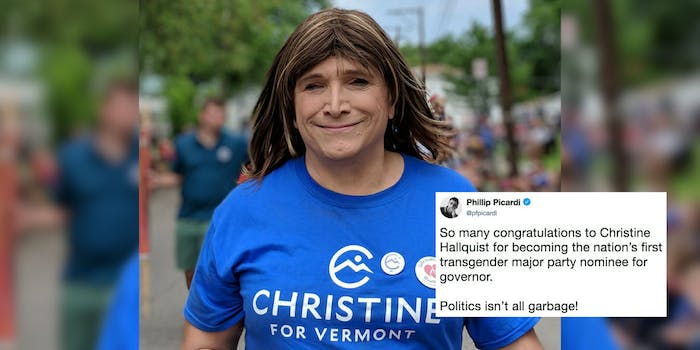 Last night, Democratic candidate Christine Hallquist made history by cinching the nomination for governor in Vermont, making her the country’s first openly transgender gubernatorial candidate for a major party.

According to the New York Times, Hallquist beat out three other candidates in her race. Prior to her political career, Hallquist was the CEO of Vermont Electric Cooperative, a position during which she transitioned in 2015. Parts of her stump speech drew from her experiences as presenting as a woman for the first time, sharing the sexism she faced in the boardroom and on the street after she transitioned.

“I remember the first time after transitioning, a stranger walking by told me to smile—I’m like, ‘Who the heck are you to tell me to smile?'” Hallquist said. “What my transition has taught me is just how far we have to go.”

Hallquist will now run against Republican incumbent Phil Scott, who was found by Vermont public media organizations to be favorable with nearly half of Democrats in the progressive state. She reportedly voted for Scott in 2016 but is tying her own candidacy to the nationwide backlash following that year’s presidential election.

“Tonight, we made history,” Hallquist said at her election night party. “I am so proud to be the face of the Democrats tonight.”

Across Twitter, Hallquist’s supporters and allies of the transgender community have cheered on her gubernatorial nomination.

Congratulations to Christine Hallquist, the first transgender woman to be nominated by a major political party as a candidate for the governor’s office. An historic day. https://t.co/P2X2v2ZGDA

Congrats to #ChristineHallquist who is the winner of the Vermont Democratic primary for governor! Making her the first transgender person nominated for governor by a major party! #ImWithHer #GoChristine pic.twitter.com/pbYqfGLjXs

Vermont Democrat and former utility CEO Christine Hallquist is now the first transgender major-party candidate to ever be nominated for governor. 🏳️‍🌈💙🏳️‍🌈

I’m honestly sitting here crying reading all the wonderful nationwide responses to Christine Hallquist’s win in the primaries tonight. In this moment, I’m so proud to be a Vermonter! Let’s put this remarkable woman in office!

So many congratulations to Christine Hallquist for becoming the nation’s first transgender major party nominee for governor.

Many took Hallquist’s nomination as a sign of progress for the country, amid the Trump administration attempting to remove protections and freedoms for transgender students and service members, and several states across the country legislating the use of restrooms by transgender people.

We live in an era of striking contradiction. On the same day that the President of the United States called a black woman a dog, Christine Hallquist just became our nation’s first transgender woman to win a major party’s gubernatorial primary. A rollercoaster day for progress.

While conservative states try to figure out what bathrooms transgenders should use, Vermont just nominated a trans woman to be its Democratic candidate for governor.

Couldn’t be prouder of my home state. https://t.co/EgTZrrt87f

As a transgender woman and someone who cares deeply about this country, Christine Hallquist’s win isn’t just historic. It’s also a powerful rebuke against this White House that has worked non-stop over 19 months to harm and erase transgender Americans. Tonight, I feel pride.

Some reminded those celebrating that Hallquist is the first openly transgender gubernatorial candidate for a major party. Other transgender folks may have been nominated before but weren’t out at the time and have yet to publicly come out.

Friendly reminder for newsfolks tonight: Christine Hallquist is the nation's first *openly* trans nominee for governor by a major party.

Be precise. Queer people have been here for all of human history.

In 2018, Democrats have nominated:

🏳️‍🌈 On to November! 🏳️‍🌈 pic.twitter.com/aP0iiCJWyv

We will not be erased. November is coming.#ChristineHallquist

On Twitter, Hallquist thanked her supporters and other Democratic 2018 candidates who she’ll be running alongside come November.

I can't wait to hit the campaign trail with you, @BernieSanders We're gonna make Vermont and the nation proud. #vtpoli #bluewave https://t.co/Le3Zqrr9H2