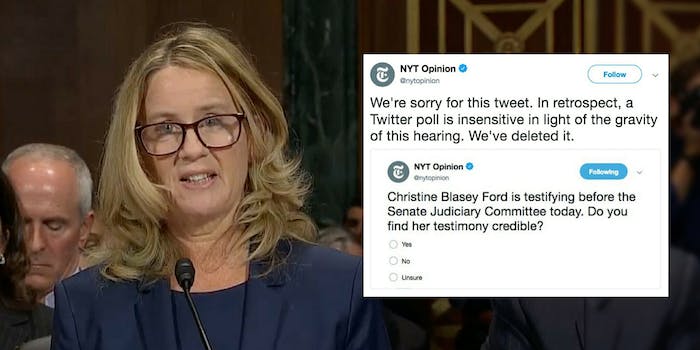 The Times messed up, big time.

After Christine Blasey Ford recalled how Brett Kavanaugh, as a teenager, held her down on a bed at a get together, attempted to take her clothes off, and covered her mouth as she screamed, Ford’s voice shaking as she relived her trauma before the Senate Judiciary Committee and tens of thousands of people watching at home, the New York Times opinion section wanted to know one thing: Did Twitter find Ford’s testimony credible?

Yes, this was a real question that the Twitter account for the paper’s oft-criticized opinion section posed to the internet, as if the court of public opinion had not already been in session since before Ford’s identity was revealed less than two weeks ago.

The poll, which has since been deleted, asked voters to voice whether they felt Ford’s testimony was credible, giving options for “yes,” “no,” and “unsure.”

After deleting the tweet, the opinion account shared an image of the offensive poll, with the caption, “We’re sorry for this tweet. In retrospect, a Twitter poll is insensitive in light of the gravity of this hearing. We’ve deleted it.”

We're sorry for this tweet. In retrospect, a Twitter poll is insensitive in light of the gravity of this hearing. We've deleted it. pic.twitter.com/4CqRhkuCat

While the tweet was live for less than four hours, it only garnered a few thousand votes, with a majority of critics tweeting directly at the Times social media account to express their opinion.

Fuck this kind of shit. Don’t put people’s sexual assault and lived experience up for public debate like this. Tweets like this just continue to fuel the fire that survivors have to endure. https://t.co/ZEdPf9WEId

I am glad I no longer have an NYT subscription reason number eleventy hundred and one – how they are able to walk upright when contorting themselves to be fair to both sides I can't imagine: https://t.co/l8Men73oaJ

The New York Times opinion section is looking for reader engagement on this hearing. How would you like to engage with @nytopinion?

[ ] Chop them up and feed them to iguanas
[ ] Strap them to a missile and fire them into a volcano pic.twitter.com/VVpA1I2aE4

And while the Times’ opinion account did apologize, few people were satisfied by the apology, because, well, the poll was shared in the first place.

Somewhere in your processes this should have been stopped. It speaks volumes also that you didn't poll for Kavanaugh's credibility. Many unforced errors on your part, you should know better. https://t.co/I1gvZxojBq

It's maddening and offensive that anyone – much less a storied institution like the NYT – would decide that the appropriate way to comment on this is via the lens of sportification. A woman's life was ruined forever. GTFOH w/ this basura. https://t.co/g9uPzgSuC6

Sorry, New York Times. Perhaps the internet is done with armchair analysis about a woman’s believability when it comes to recounting her experience with sexual assault.