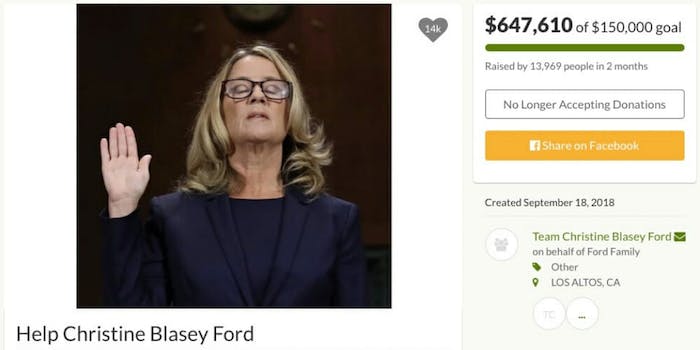 Months after she publicly told the Senate Judiciary Committee about how then-Supreme Court justice nominee Brett Kavanaugh sexually assaulted her when they were in high school, Christine Blasey Ford is still going out of her way to help other survivors of assault.

In her latest update on her GoFundMe campaign, which raised nearly $650,000 for her and her family’s security and displacement from their home, Ford has said she has closed the campaign and will donate the remainder of funds to organizations that support trauma survivors. Ford wrote in the update, posted Nov. 21, that she’s researching organizations that may be able to best use the funds, and that she’ll update the GoFundMe campaign again once the selection process is complete.

Ford called the donations for her security and temporary housing “godsend,” and wrote to donors that so far, the funds have been used to pay for a security service from Sep. 19 through the present, a home security system, housing and security while in D.C., and temporary housing while her family was threatened to the point of having to leave their home.

In September, Ford garnered support from survivors and critics of President Donald Trump’s latest Supreme Court justice pick when she publicly detailed her account of assault in front of the Senate Judiciary Committee, stating that Kavanaugh, with the help of his friend Mark Judge, sexually assaulted her and attempted to rape her when they were teenagers. Kavanaugh repeatedly denied the accusation.

Across the internet, women and men vocalized support for Ford and criticism of Republicans and GOP Senate Judiciary Committee members who failed to hold Kavanaugh accountable during his confirmation hearing by not questioning him about his recollection of events. Even prior to her testimony, Ford and her children faced threats to her wellbeing from people accusing her of lying about Kavanaugh’s attempted rape.

Two GoFundMe campaigns were created to support Ford and raised more than $850,000 for her in total—the second one, which raised $209,000, has also been closed to donors.

“Although coming forward was terrifying, and caused disruption to our lives, I am grateful to have had the opportunity to fulfill my civic duty,” Ford wrote. “Having done so, I am in awe of the many women and men who have written me to share similar life experiences, and now have bravely shared their experience with friends and family, many for the first time. I send you my heartfelt love and support.”