Religious schools are quietly opting out of the federal anti-discrimination law.

There’s a giant loophole in a key gender-equality law that is leaving some students on American campuses at risk.

Title IX is typically thought of as a non-negotiable federal law that ensures equal funding for women’s sports in schools. In practice, the 44-year-old statute provides widespread protections for women and, more recently, LGBT students.

For religion-based schools, however, Title IX is optional.

In an increasing trend, religious colleges—especially Christian institutions—are filing for Title IX waivers for reasons that don’t have much to do with women’s sports at all.

On Tuesday, students at two Christian colleges staged campus protests alleging that their schools applied for Title IX waivers in order to legally discriminate against LGBT students. The protests, at California’s Biola University and at Oklahoma Baptist University, were part of an ongoing campaign urging religious schools to #GiveBackIX.

Biola requested to waive title IX??? Since when is discrimination upon any basis ever okay? #GiveBackIX

.@biolau your policies harm LGBTQ+ people and frankly, it's unbiblical. think about what Jesus would do #GiveBackIX https://t.co/1QO59vKzc7

In December students from about six different schools met with the LGBT rights group Soulforce. Yazmeen Nuñez, Soulforce’s director of programs and communications, told the Daily Dot that the students had observed a pattern of problems related to their respective colleges’ waivers.

“What we determined is there’s a lot of risk for LGBT students on these campuses, particularly when the schools already have waivers on Title IX—including outing students, expelling students,” said Nuñez. “We decided it would be stronger and safer for our student members to band together.” 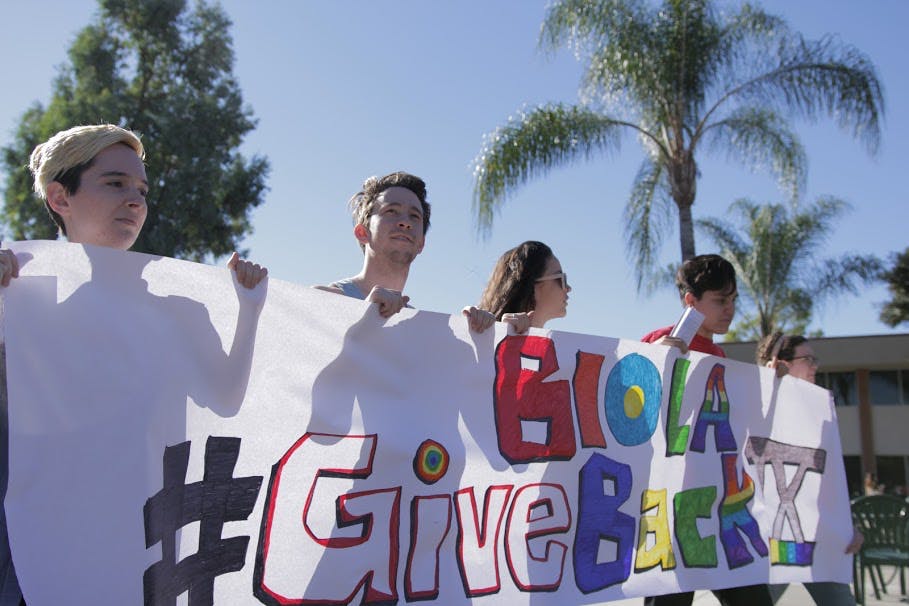 In April 2014, the U.S. Department of Education issued new guidance that made it clear Title IX protected transgender students from discrimination. Passed into law in 1972, Title IX was intended to increase educational opportunities for girls and women by prohibiting school discrimination based on sex—provisions that were expanded to include gender identity two years ago.

According to Soulforce, applications for Title IX waivers have ramped up since the trans guidance was issued, as religious schools sought ways to legally opt out of offering transgender students equal access to facilities, sports, and other educational opportunities. 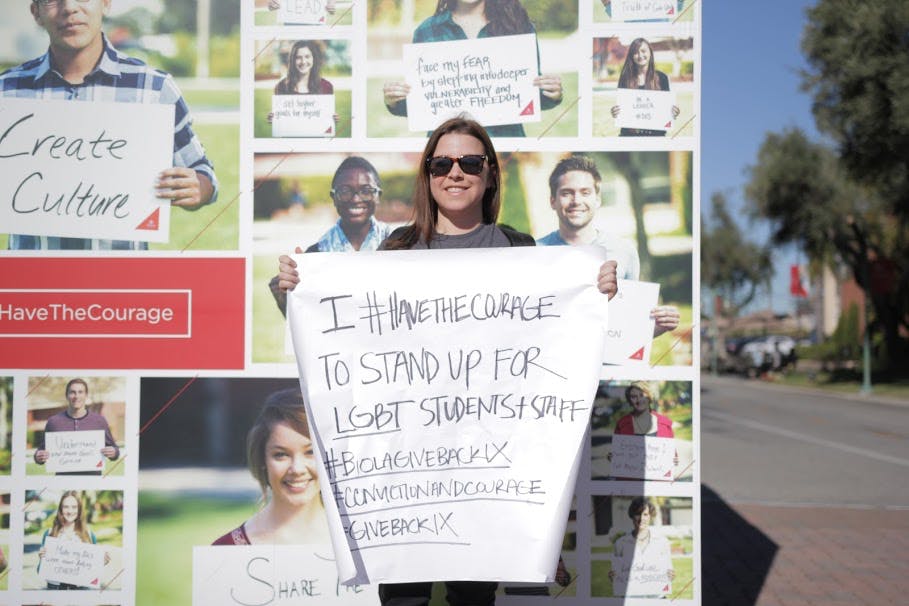 The only problem is, many LGBT students are already ensconced in religious institutions—and they are the ones feeling the brunt of the waivers.

“I’m a trans Biola alum. I didn’t come out until I graduated because of social pressures at Biola as well as the greater backdrop of Evangelical Christianity,” Coley Baker, a 2014 Biola graduate, said in a statement emailed to the Daily Dot. “Title IX exemptions make the environment of fear and rejection more tangible. Students shouldn’t be afraid of being kicked out of a university that they’re paying to attend due to their gender identity.”

Roughly 40 current and former students participated in Tuesday’s Biola protest. But the fear of retribution was so great at Oklahoma Baptist, the 15 students assembled there asked that no one take photographs so that they could protest in relative anonymity. 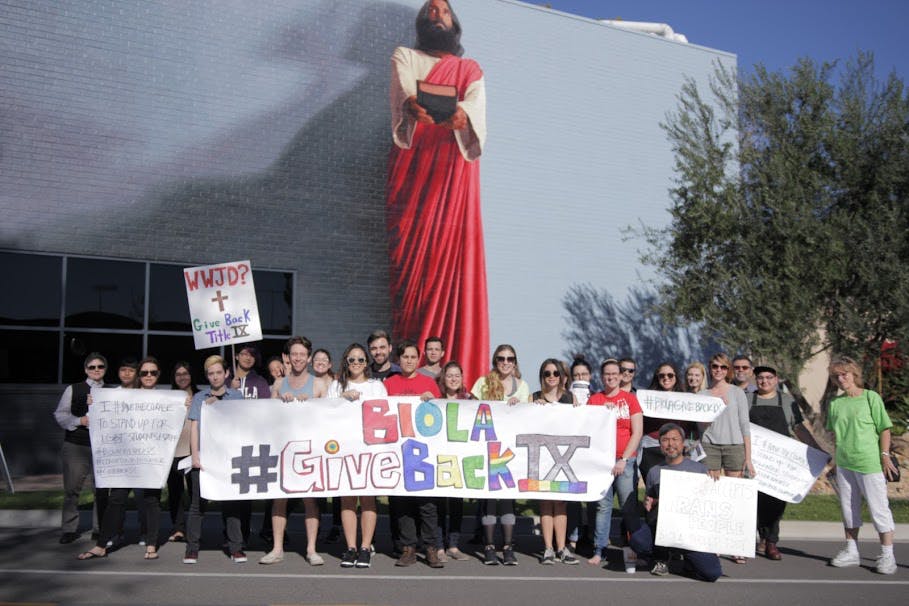 “We have heard from students that were fired from their jobs,” said Nuñez. “But as with any legal concern, it’s very hard to tell whether it’s because of the waiver.”

In a statement emailed to the Daily Dot, Oklahoma Baptist defended its use of a Title IX waiver as a necessary step for the school to comply with its religious tenets.

“OBU is a caring, welcoming community where every employee and student is expected to treat one another with dignity and respect as mutual bearers of God’s image, displaying the love of Christ. … As a Southern Baptist university, controlled by the [Baptist General Convention of Oklahoma] and operated by a Board of Trustees appointed by the Convention, OBU operates in accordance with The Baptist Faith and Message as adopted by the Convention. University policies are based on these beliefs.”

The quiet applications for Title IX waivers have left some students in the dark about how the waivers are being used, and whether justifications for discriminating against LGBT students are the primary goal. More than 200 schools across the country hold waivers that allow them to opt out of Title IX’s requirements. But according to Soulforce, at least 50 applications were filed in the past year alone, in what they see as a rush against the Department of Education’s trans inclusivity guidance.

“We see a groundswell of LBGT rights being codified into law, and the right-wing response is to tighten down with religious freedom restoration acts, and the pressure on college campuses to take on these waivers,” Nuñez told the Daily Dot.

As part of the #GiveBackIX campaign, Soulforce is collecting signatures on a “statement of solidarity” that names a few of the threats to LGBT students on waivered campuses.

Nuñez told the Daily Dot the goal of the campaign is to convince schools to rescind the Title IX waivers, and to be clear about how Title IX complaints are handled internally.

Soulforce’s national campus organizer Jordyn Sun added, in an emailed statement, that the goal isn’t to force Christian schools to change curricula or do anything else besides protect current and future students from being singled out for discrimination.

“Title IX is about a lot more than just affirming students’ identities, it’s about ensuring their right to a safe and equitable education,” said Sun. “We believe student voices are powerful and must be considered before universities apply for religious exemptions.”