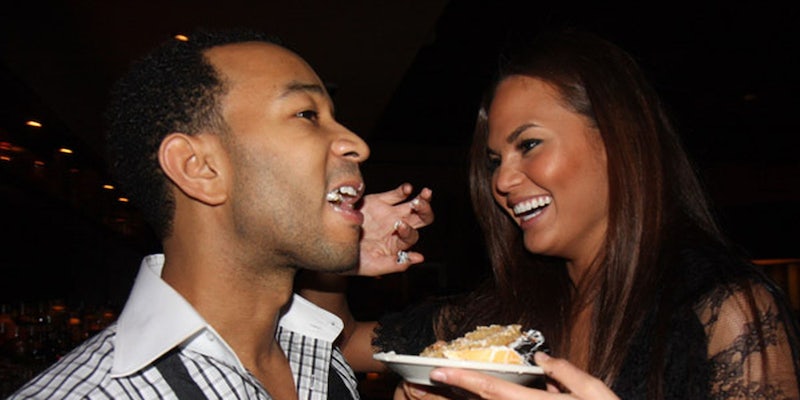 Chrissy Teigen gets shamed for leaving the house without her newborn

Gasp, she went to dinner with her husband.

This weekend, Chrissy Teigen made a classic new-mom mistake: She had fun.

The model and mother of one-week-old baby Luna went out with her husband John Legend and you’ll never guess what happened next—they had dinner.

Shocked fans took their concerns to Instagram. Teigen took screenshots of the comments, which accused her of abandoning her child, smelling like “afterbirth,” acting selfish, and, of course, being a bad mother.

I went to dinner. People are pissed. Good morning! pic.twitter.com/oQ54mtet8c

Even the “kinder” comments reeked of concern trolling, with one person commenting, “I don’t think I’d ever let anyone watch my child without me til [sic] a month or two. I just wanted to hold and stare and [sic] my children when they were born.”

Teigen was having none of it, calling out people for the bizarre criticism of vagina smells and joking that she couldn’t find her baby.

i dunno i can't find her https://t.co/fEj8rFHEMI

This isn’t Teigen’s first brush with social media “momtroversy.” She’s clapped back at people telling them to get out of her uterus and to stop telling her how to parent.

I did IVF. One at a time. It isn't twins. I can see the damn thing. Get out of my uterus!

Welcome to the wonderful, warm world of motherhood, Chrissy, where you cannot win no matter what choices you make. But it’s clear she isn’t backing down from insisting that she’s allowed to be something revolutionary: both a human and a mother.