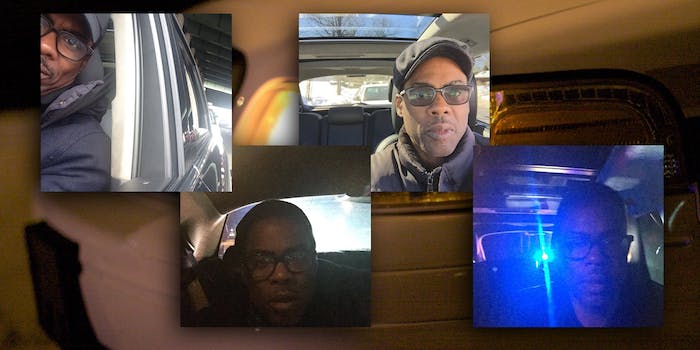 He's been documenting his police encounters all year—and it's exposing ugly truths about racial profiling.

Chris Rock takes a selfie every time he’s pulled over by police. He’s been doing it for some time now, but the action really drove the point home after he got pulled over for the third time in just seven weeks last month.

Starting on Feb. 13, just two days before he would appear on SNL’s 40th Anniversary special, Rock was pulled over by cops in what looks like the middle of the day. He asked his followers on social media to wish him luck.

Just got pulled over by the cops wish me luck http://t.co/pey2XAp6uu

Two weeks later, on Feb. 27, he was pulled over again. This time, he was the passenger in the vehicle.

I'm not even driving stop by the cops again http://t.co/yTPPPjcKEO

More than a month passed between his second and third time getting pulled over by police during this seven-week period, part of which he spent doing publicity for Top Five in Australia. The third stop happened on Mar. 31, at night, while he drove. Again, he asked people to wish him luck.

Stopped by the cops again wish me luck. pic.twitter.com/6t0wlgwkrJ

Last April, the message to his followers and fans was the same.

Stop by the cops wish me luck http://t.co/GKE2oKnAYR

Rock has dealt with the issue in his standup routine. In his “How to Not Get Your Ass Kicked by the Police” segment, he offers tips such as keeping notes and looking for recurring patterns.

He isn’t even immune to getting pulled over when he’s with Jerry Seinfeld; it happened when he shot his episode of Comedians in Cars Getting Coffee last year in New Jersey while Seinfeld drove an orange 1969 Lamborghini Miura P400S. Afterwards, he explained the bleak reality to Seinfeld. He’d been worried during the police encounter, he said, and he was still worried.

“It’d be such a better episode if he pulled me to the side and [beat] the shit out of me, don’t you think?” Rock told Seinfeld. “Now here’s the crazy thing: If you weren’t here, I’d be scared. I’m famous, still black. Right now, I’m looking for my license right now.”

Rock’s documentation struck a nerve. Former Grey’s Anatomy star Isaiah Washington shared with Rock one of the things he’s done to avoid being pulled over as often as he had.