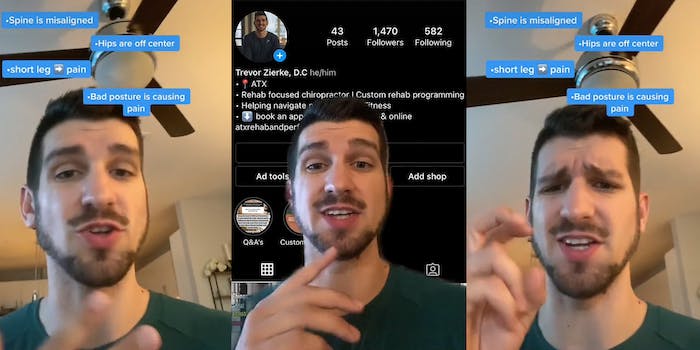 ‘When I say almost all the usual lines chiropractors tell you are lies, I mean almost all of them’: Chiropractor says that most of his profession is a scam

A chiropractor has gone viral on TikTok after calling out an unexpected group—chiropractors.

TikTok user Trevor Zierke is a D.C. (Doctor of Chiropractic) whose page is filled with many tips to help people properly lift weights and take care of themselves. Now, he’s gone viral after saying that “literally 99% of my profession” is a scam.

“When I say almost all the usual lines chiropractors tell you are lies, I mean almost all of them,” he says.

Zierke then goes on to give examples of issues chiropractors allegedly make up, including someone’s spine being “misaligned,” tension on nerves causing health problems, and someone having back pain because their hips are off-center.

“Almost all of these aren’t true,” he concludes.

In follow-up, he clarifies that not all chiropractors are scam artists, just that the industry is filled with scams and false promises.

He states in this video that the reasons most people are told they need to go to a chiropractor are “overblown or just flat out lies proven wrong by research.”

Zierke also notes that, while there are many scams, that “doesn’t mean you can’t get help from a chiropractor.”

A 2016 article from TIME regarding the legitimacy of the chiropractic field notes that controversy arises when chiropractors claim their services can help issues not stemming from musculoskeletal conditions. The report cites Michael Schneider, an associate professor of health sciences at the University of Pittsburgh, who says these claims are not based on scientific evidence.

In a third TikTok, Zierke offered some valid reasons to see a chiropractor.

He notes that one can seek help from a chiropractor if they have musculoskeletal pain that has been ongoing for more than one to two days, and that’s about it.

The creator says "basically anything that you answer ‘no’ to the question, ‘Would it feel better if that area was rubbed on for a bit?’” are issues that couldn't really be fixed by a chiropractor, including "GI [gastrointestinal] pain, hormonal issues, nutrition," among others.

In comments, users were largely supportive of Zierke's message.

First, many said that while the TikToker was right to point out the scammy nature of some chiropractors, others can be genuinely helpful.

“There’s good and bad chiropractors just like regular doctors,” one user wrote. “I couldn’t walk without shooting pain before my spine was adjusted by a chiropractor.”

“I’ve worked for two different Chiropractors. One was a complete scam artist and the other was incredible,” a second user added. “It’s a shame honestly.”

Others were simply thankful for the message of the videos.

“As a physiotherapist I've been trying to tell this but I don't want to like offend any chiropractor in doing so,” a commenter shared.

“Working in a chiropractic office, this is fair,” a further user wrote. “I have issues that I know an adjustment will help & other pain that would be better stretched/released.”

Update 2:30pm CT August 6: In an email to Daily Dot, Zierke reiterated the intention of his videos.

"I would just like to clarify that chiropractors, in general, are not a scam or are inherently scammers (I myself am a practicing chiropractor), but rather a lot of very popular sales tactics, phrases and wording used to imply patients need treatment, and methods of treatment, have never been proven to be true," he explained.

"When chiropractors say & use these methods stating things that are not factually true—I believe it’s scammy behavior and practices."

"There are still a lot of very good, honest, and integral chiropractors out there," he concluded. "They can provide a lot of help and relief to patients. But that’s unfortunately not the majority, and I’ve heard too many stories of people falling victim to some of these scam-like tactics from bad apple chiropractors."