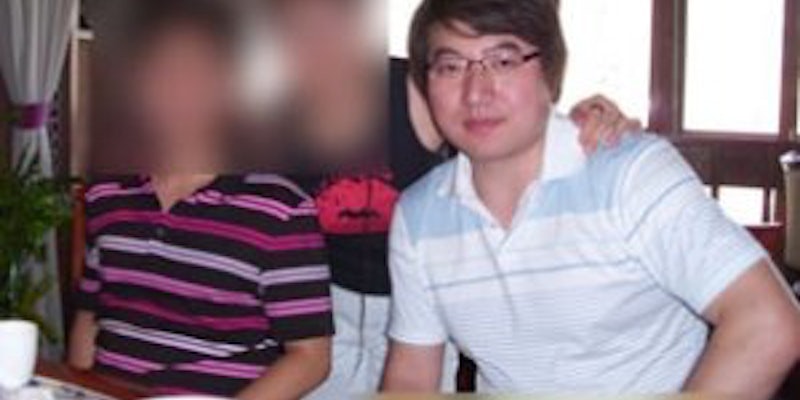 Zhao Xiaobin has been in custody since Nov. 7th for tweeting a joke about China's seven newest party leaders.

The human rights record of China’s seven newest leaders has gotten off to an inauspicious start, at least on the Internet. Twitter user @Stariver, whose real name is Zhao Xiaobin, has been detained since Nov. 7. His crime? Telling a joke.

Since one or two Chinese characters can represent an entire word, you can pack a whole lot more into a Chinese-language tweet than an English one. On Nov. 4, three days before the party announced its newest leaders at the 18th National Congress, Zhao tweeted this nod to the Final Destination series of horror movies:

#SpoilerTweet  #Enter-at-your-own-peril  “Final Destination 6” has arrived. In which the Great Hall of the People collapses all of a sudden. All 2,000+ people meeting there died except for 7 of them. But afterwards, the seven die one after another in bizarre ways. Is it a game of God, or the wrath of Death? How will 18, the mysterious number, unlock the gate of Hell? Premieres globally on November the 8th to bring you an earthshaking experience! (Translation via Seeing Red in China)

Three days later Zhao was detained. The official reason was for being “involved in spreading false and terrible information,” according to friends who inquired about his whereabouts at the local police station.

Zhao is a graduate of China’s prestigious Peking University, where he studied literature. Tall and athletic (he volunteered as a martial arts instructor), Zhao worked as a journalist before moving into Beijing’s financial sector. According to Cao, Zhao has a reputation in Twitter’s Chinese community for “cool and biting comments about current events in China that cut the froth and burst false ‘hopes.’”

Photo via Seeing Red in China

Supporters have drafted a petition calling for Zhao’s release.

His family hasn’t seen him since Nov. 7.