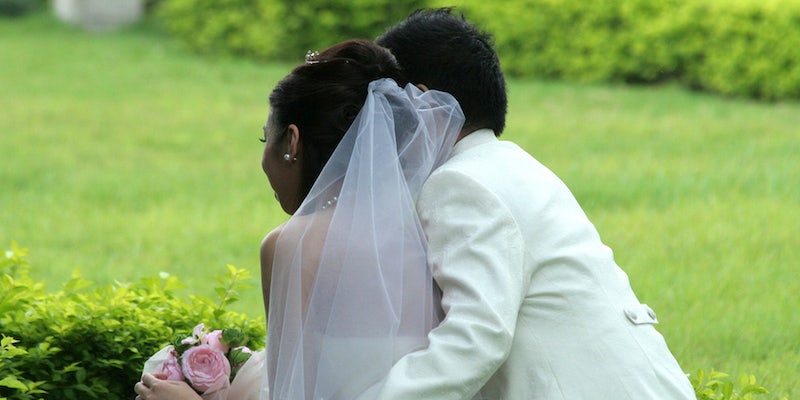 Chinese women are renting boyfriends to please their disapproving parents

Hiring a boyfriend for special occasions can be easier than looking for love.

In a trend that sounds lifted straight from the screenplay for the 2005 romantic comedy The Wedding Date (or the 2008 romantic TV film Husband for Hire) (or a gender-reversed version of, like, seven How I Met Your Mother episodes), women have taken to cruising the online Chinese retailer Taobao for temporary rent-a-boyfriends, the Chinese online newspaper People’s Daily reports.

For as little as 800 yuan (U.S. $132) per day, single women in China can hire a clean-cut, twenty-something boyfriend for family and work functions. The service is apparently most popular around the Chinese New Year, when Chinese women are most likely to return home for family parties. It’s particularly in demand among women in their 20s and 30s, who face intense social pressure to get married before a certain age (although the service is available for Chinese men as well).

According to the article, many of these “rent boyfriends” hawk their wares on the online retailer Taobao, the Chinese eBay that apparently doubles as a sort of virtual hub for beard romances. For a minimum of three days, these gentlemen will accompany women to various family and social events. Some of the ads feature an insanely detailed account of their services, including shopping (30 yuan an hour), dinner (50 yuan an hour), seeing a movie (double the price for a thriller, for some reason), and a perfunctory, 50-yuan kiss, which also includes “free hand-holding” and “a free goodbye kiss on the cheek or forehead.”

Such rigidly defined terms and deliberately unsexy language may serve to highlight the chaste nature of the rent-a-boyfriend, who does not list sex or anything beyond kissing among his services.

“I only rent my time, not my body—you know what I mean,” says Matthew Fan, an accounts manager who’s been moonlighting as a rent boyfriend for the past two years.

Still, a handful of those who avail themselves of the service clearly hold out hope that the rent-a-relationship will evolve into something more. This notion is apparently so popular that there’s even a hit Chinese TV series inspired by the practice: the 2010 Renting a Girlfriend for Home Reunion, in which the (male) main character falls in love with and marries his female companion-for-hire.

Surprisingly, this view is shared by a handful of those on the other side of the transaction. “The best result would be for me to find someone to marry through this,” one professional stand-in lover admitted to BBC News last year. Further proof that paid romances can be just as thorny and complicated as non-paid ones—and that maybe all of us should stop watching so many rom-coms.