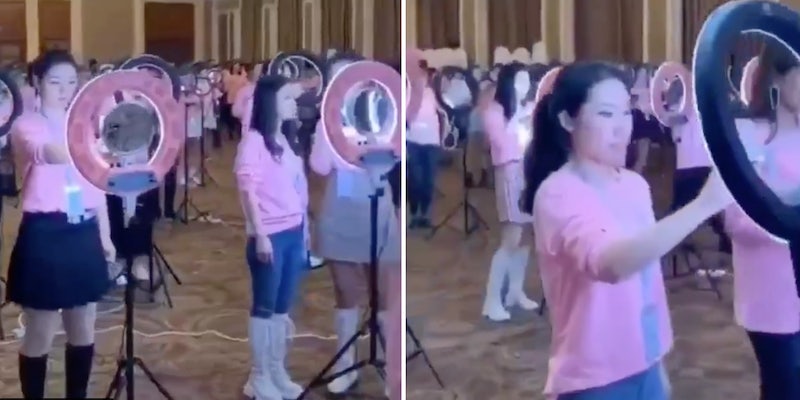 People are divided over video of ‘influencer training school’

But it's not as 'dystopian' as some think.

A short video supposedly capturing a day at an influencer school in China is causing a stir on Twitter.

It’s unclear where the footage originated from, but it has circulated on both Twitter and Reddit over the past several days. A post from Nov. 27 refers to it as being part of an “influencer training school,” while another suggests it’s a “TikTok factory.”

Whatever the case, the video shows rows of possibly a hundred women, and some men, standing in in front of ring lights and talking to the cameras on their phones.

They’re all dressed in light pink shirts with baby blue lanyards around their necks, giving the entire thing a distinct vibe some are even calling “dystopian.”

The clip prompted a debate between people on Twitter, some of whom were appalled at the notion that schools are now teaching people how to be social media influencers. “Yes very sad, like something out of Black Mirror,” one Twitter user wrote. “Maybe they’re being trained to spill propaganda.”

But others pointed out that vlogging and social media are relatively new forms of marketing, and it makes perfect sense for there to be skill-based training for the field.

“This is amazing, the world is changing, new [professions] are being born, some influencers today make more money than doctors,” user @Shinta_ZA wrote.

There was also concern that specifically pointing to these types of images in China and treating them as bizarre when there are plenty of similar scenarios going on in the U.S. reeks of xenophobia.

“Marketing schools exist in the west and moreover every social media platform indirectly offers the same dystopian incentives to act in a similar way and pursue similar trends,” user @CrustiniB pointed out.

Others drew direct comparisons to phone-banking or telethons, with one user claiming that the contents of the video are actually “weirder because it’s newer but if you think about it, call centers are way more dystopian [in my opinion] because at least this seems to be actually teaching people.”

Regardless of anyone’s personal opinion on influencers, it seems unlikely that they’ll simply stop existing anytime soon. And as many users pointed out, there are certainly far more things going on in the world—including the U.S.—that have done far more to earn “dystopian” as a descriptor.

After all, we are in the middle of a pandemic that won’t end because people continue to deny science. Some aspiring influencers wearing the same shirt can hardly compete with that.