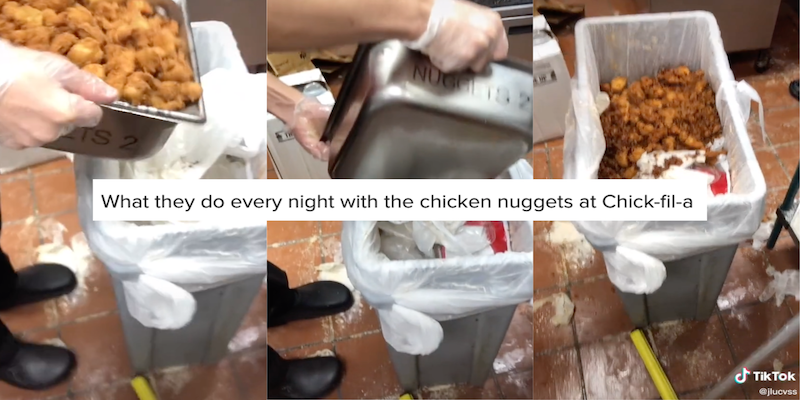 Chick-fil-A worker exposes all the nuggets that get thrown away in viral TikTok, sparking debate

'The amount of food we throw away and the amount of starving people there are just doesn’t sit right with me.'

A video of an apparent Chick-fil-A employee dumping a full tray of chicken nuggets into the trash as “Humble” by Kendrick Lamar plays in the background has gone viral, with more than 7 million views.

The TikTok by user @jlucvss received more than 507,000 likes and sparked a similar debate as the Dunkin’ video in the comments on what should be done with leftover food. Many were shocked at the amount of food in seemingly good condition being thrown away.

“Nooooooooo, give them to me!!!!” one user commented.

Others were appalled at the food waste and said Chick-fil-A should give any remaining food to unhoused people.

“The amount of food we throw away and the amount of starving people there are just doesn’t sit right with me,” one user commented. “It’s sad.”

Some people explained that food establishments can’t give away food to unhoused citizens in case the food makes them sick, presenting potential health and financial liability.

“Chicken that sits too long cannot be given out to the homeless hours later,” one user commented. “It will get them sick.”

In an effort to reduce food waste, Chick-fil-A created its Shared Table program in 2012, which donates surplus food to local soup kitchens, shelters, and nonprofits. Employees package surplus food, which partnering organizations then pick up. Across Canada and the U.S., there are reportedly more than 1,300 participating Chick-fil-A restaurants in the Shared Table program. But a 2013 survey by the Food Waste Reduction Alliance found that only 1.4% of food waste is donated by restaurants.

Food-waste debate aside, others online found it ironic that the Chick-fil-A employees were playing and singing along to “Humble” in the background of a food establishment known for its Christian values.

“Well the Kedrick in the background isn’t very holy,” one user commented.

Others created their own humorous stitches, a feature in which people are able to use scenes from other TikTok videos in their own video.

From saying “You bastard” while crying to pretending to sift through a Chick-fil-A garbage can, people online are joining in on the Chick-fil-A debate.

“You could’ve gave them to me,” one user says in their video. “I would’ve gave my address.”

The original TikTok creator and Chick-fil-A did not immediately respond to the Daily Dot’s request for comment.