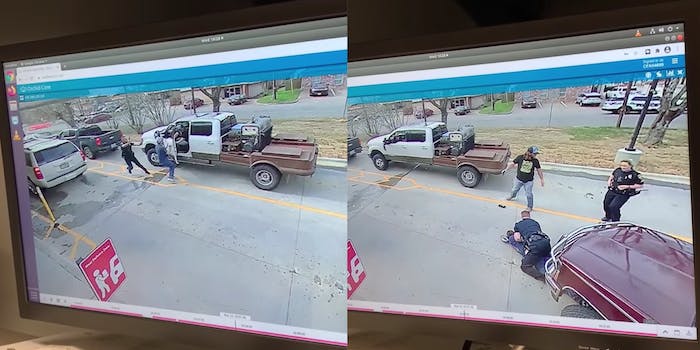 'Not sure he hadn't practiced that.'

A man waiting in a Chick-fil-A drive-thru exhibited some quick thinking when he stopped a suspect fleeing from police.

Surveillance footage shows the man sitting in his truck waiting for his Chick-fil-A order in Jacksonville, Texas. Another man runs in between the line of cars, pursued by police and coming toward the man in the truck.

The truck driver swings open his door, causing the suspect to collide with it and stumble enough for the officer to catch up and tackle him to the ground.

The line still hasn’t moved, so the guy gets out of his truck and goes over to where the officer dropped something—possibly a stun gun—and slides it further away from where the officer is still struggling with the suspect.

He calmly heads back to his truck as another officer arrives on the scene.

According to the Jacksonville Police Department, officers were in pursuit because the suspect had been driving a stolen vehicle.

“The suspect was quickly apprehended after the ‘HANGRY’ (but helpful) citizen reminded the suspect as to why you should never run from the police,” the department wrote on Facebook.

The whole thing went down in under 30 seconds, and commenters were impressed by the man in the truck’s quick thinking.

Some people suggested the mystery helper deserves some free Chick-fil-A for his efforts, but hopefully, he was at least able to grab the sandwich he ordered before his time at the drive-thru got a little more exciting than anticipated.