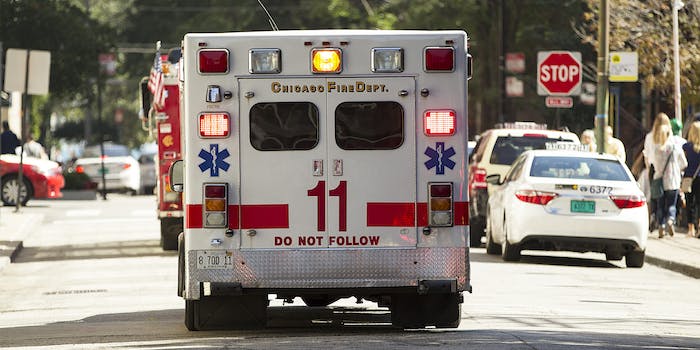 Why did paramedics cover a still-breathing shooting victim with a white sheet?

Onlookers could see he was breathing from afar.

Paramedics responding to a shooting in Chicago’s Near West Side neighborhood covered a 17-year-old gunshot victim with a white sheet, as though he were presumed dead, despite the fact that he was breathing heavily enough for onlookers to see.

The shooting occurred at 4:50a.m. Monday morning, eventually leaving four injured and two dead, including 17-year-old Erin Carey. Carey had been shot in the head, and paramedics who arrived on the scene presumed him dead, covering him with the sheet. However, people in the crowd saw him breathing and his body twitching. According to the Chicago Tribune, they began to yell for police or paramedics to take the sheet off of him, and some addressed the young victim directly, hoping he would survive.

Despite this, according to BuzzFeed News, action was taken when an officer radioed in that he saw movement on live footage of the crime scene. He reportedly said over the radio, “He is responsive, he just moved on the camera, moved his head from side to side, so he’s not dead.” Paramedics removed the sheet and performed chest compressions, but Carey had been under the sheet without medical care for an unknown amount of time. People on social media are demanding to know how this could happen.

OmG! RT @Marcus_OTF: This man was shot at 4:30 this morning in Chicago and they had his body covered up as if he was dead. Paramedics didn’t even try to save him until someone pointed out that he was still breathing smh.. pic.twitter.com/UhMKtPbhki

SMH! #BlackLivesMatter come on now Chicago PD and paramedics! Y'all gotta do better than this!!! WTF!? https://t.co/PBRgPh1O2S

How the hell do paramedics not check a pulse? Are they actors dressed as medical personnel? What the hell is going on in Chicago?

Although Carey eventually received medical attention, he was the last victim of the shooting to be transported to the trauma center at the local hospital. He died 20 hours later in the hospital on full life support.

BuzzFeed News spoke to Larry Langford, the director of media affairs for the Chicago Fire Department, about the incident. “We have to figure out if someone did something that was grossly negligent and if it was a mistake,” he said. According to Langford, his department is doing a thorough investigation, including reviewing phone calls and radio communications, as well as “who took what assignments.” They hope to determine how it is possible that Carey was presumed dead.