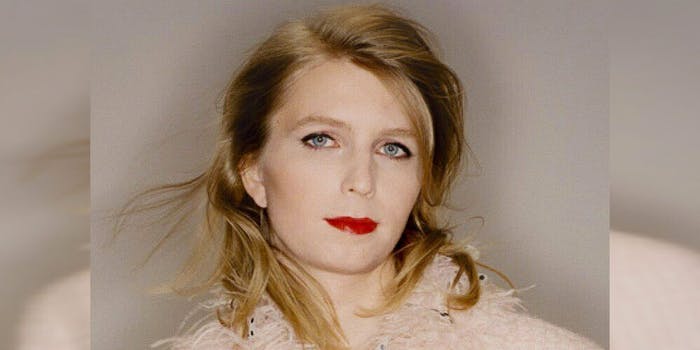 Her supporters are rallying behind the jailed activist.

Chelsea Manning was released from the William G. Truesdale Adult Detention Center in Virginia yesterday after spending 62 days in jail.

Manning was released on Thursday after the term for the grand jury that subpoenaed her in March expired. A member of her support network let people on Twitter know she was free, and also shared the bad news: Manning had been served a subpoena by a new grand jury before she was even released from jail. She’ll have to appear before this grand jury on May 17, meaning her freedom may be as short-lived as a week.

Supporters shared their joy at her freedom—and their fury at how quickly it may be taken away again.

Get some good rest. The fight isn't over. The American empire is looking to destroy anyone who won't cooperate with them. Keep fighting!

Stay strong – you are right!

The former U.S. military analyst has admitted to sending government documents to WikiLeaks.

Manning was originally jailed in March after refusing to testify to a grand jury on the basis that she had already revealed everything in her court-martial, and that the grand jury process was a violation of her constitutional rights. The judge ordered that she be confined until she testifies or the grand jury investigation is over. Manning intends to continue to refuse to testify, and this time her legal team has a new argument against her being imprisoned.

Earlier this week Manning and her legal team filed a motion declaring that she will never cooperate with the grand jury. “The only permissible purpose for confinement under the civil contempt statute is to attempt to coerce a witness to comply with the subpoena,” wrote Manning’s attorney Moira Meltzer-Cohen in a statement to the Sparrow Project. She explained that if, “the witness is un-coercible, then confinement has been transformed from coercive into punitive, in violation of the law.”

Manning stated in the filing that her confinement, “proves my long held belief that grand juries are simply outdated tools used by the federal government to harass and disrupt political opponents and activists.”