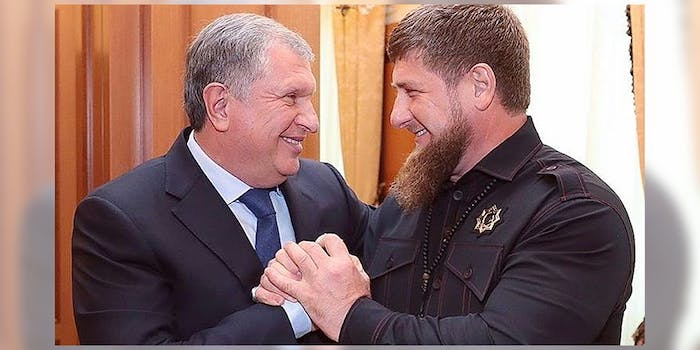 The selfies must go on.

A lynchpin of the Chechen president’s propaganda effort, his Instagram account is a place for Kadyrov to pump iron, play with adorable baby tigers, and demand total obedience from his people.

Kadyrov’s Instagram, which sometimes features celebrity cameos from Steven Seagal and Elizabeth Hurley, is a spectacle as bizarre as it is unintentionally homoerotic. For a political tyrant who has allegedly vowed to “eliminate” the country’s LGBTQ population before Ramadan—a community the Russian republic also denies exists—his social media is pretty gay. The 42-year-old UFC enthusiast is frequently pictured getting up close and personal with his male colleagues and fangirling over President Vladimir Putin, even sporting an array of T-shirts with the Russian leader’s face on them.

Here are some of the weirdest and bromanciest selections from the Instagram of Chechnya’s tyrant-in-chief.

A former boxer who reportedly once met Mike Tyson, Kadyrov is obsessed with displaying his masculine strength. He really, really wants you to know he’s jacked. In a 2015 video, the Chechen leader wrestled with a giant python in a short video produced with a Michael Bay-like gloss. He claimed that the serpent represented the devil, calling it the embodiment of “evil.” Nothing, though, tops his repeated sparring matches with alligators, such as in this photo of Kadyrov emerging victorious after taming the wild beast.

The president’s Instagram shows him to be many things, including a snappy dresser, pointy hat enthusiast, and devoted lover of organic produce. But Kadyrov would also like you to know that he’s a devoted father and family man. In this photo, the leader and his clan pay tribute to the The Royal Tenenbaums with a look that would make Richie Tenenbaum proud. Who knew that the Russians were such big Wes Anderson fans?

In this photo from 2015, Kadyrov—who came to power after crushing the militant insurgency in Chechnya—sends a message to his foes: “No enemy forces can withstand the hero of Russia, Ramzan Kadyrov!” Loading his motorbike up with a machine gun is pretty much the closest thing he gets to going on a casual Sunday joyride.

Kadyrov, who celebrated President Donald Trump’s surprise win in the 2016 election with a post championing his victory, does not like Hillary Clinton. In this video from February, he claimed Clinton has a “feeble voice” and a “well-rehearsed smile” and called her a “female loser disease candidate,” aping just about every Republican op-ed columnist in 2016. If Fox News needs an extra pundit, they should put this guy on speed dial.

Chechnya: where your wife or daughter can be an extra in a real-life version of The Handmaid’s Tale.

Kadyrov’s Instagram feed is filled with loving tributes to Putin, who installed the former independence fighter as the republic’s head of government in 2007. Since Kadyrov owes his career to the Kremlin, his love for Putin is not surprising. But the Chechen strongman’s devotion to his boss goes above and beyond: The two are frequently pictured giving sharing a friendly fist bump or a manly snuggle. Like any creepy obsessed stalker worth his salt, Kadyrov even has an array of Putin-themed tees that he wears to the gym.

Also check out Putin photobombing an already deeply uncomfortable photo between Kadyrov and a female journalist, who is clearly counting the exits.

If you didn’t know that we were talking about a man whom human rights organizations say supported the abduction of over 100 gay men, some of whom are believed to have been murdered, what would you think was happening here? It appears to be a picture of a loving same-sex couple holding hands. Were you to get this photo in the mail, you might even think that it’s an invite to their wedding. I mean, look how happy they are! That may not be the case (who can say, though, really?), but Kadyrov sure does love his bros.

Nothing to see here, folks.

I have no idea what’s going on in this picture, and no amount of explanation would ever help it make sense. All I know is that man on the ground does not look happy.

Kadyrov loves animals. Whether it’s getting nuzzled in a stable in celebration of whatever the hell “Horse Solidarity Planet” is or taking to social media to look for his lost cat, the fauna are a favorite subject of the sensitive yet violent tyrant. In this adorable picture from 2016, the president cuddles up with a lion cub, who likely bit his face off two minutes after the photo was taken. It’s all fun and games until someone has to get total facial reconstruction.

This photo is Kadyrov’s answer to that viral photo of Putin riding a horse. He one-ups the Russian president in at least one respect: Everybody knows that if you want to maximize your Instagram likes, you gotta get a sunset in the background.

Your republic has to be rebuilt after years of a brutal war that destroyed its capital, Grozny. Since reconstruction, Chechnya hasn’t exactly been swimming in positive headlines. How do you get tourists to come visit one of the most dangerous, hostile places in the world? If you’re Kadyrov, you solve Chechnya’s PR crisis with a giant neon sign inviting people to come visit your beautiful capital. Nothing bad will happen to you, probably!

Below, Kadyrov is hanging out with his best friends, 90s “It Girl” Elizabeth Hurley and French actor Gerard Depardieu, who were reportedly in town shooting a movie.

Even stranger than the photos of these three wildly disparate people forced together (do you think they talked about Anderson Cooper?) is a collage which juxtaposes photos of Hurley with Kadyrov and his imaginary twin. Leave it to Chechnya to out Black Swan everyone.

This is a photo of Kadyrov shaking hands with a tiger. Meanwhile, more than 20 gay men have been reported missing as a result of police brutality, and Russian LGBT groups are evacuating dozens of refugees from the region.

Chechnya’s favorite daddy muscle bear might be good at the internet, but he’s still a monster.