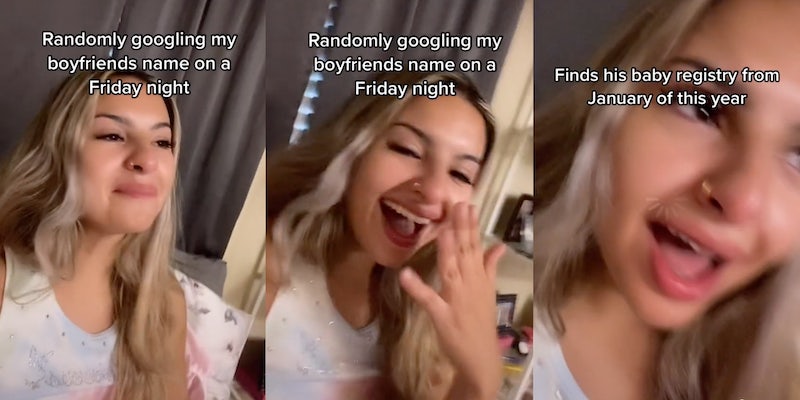 ‘He was the one’: TikToker discovers boyfriend is living a double life after searching his name on Google (updated)

She found a baby registry associated with his name and discovered he had a child with another woman.

There’s never a good way to find out that the person you’re dating is cheating on you, but one TikToker’s experience was a very specific kind of shock.

Pris (@priscilluh) had recently gotten back from going on vacation with her boyfriend of a year and a half and was missing speaking to him, as he allegedly lost his phone towards the end of their trip. So, sitting at home alone, she decided to search him on Google for the first time.

“He has no social media,” she explained. “So I google him and at first it was like, regular stuff. Like, old football things and whatever. And then I come across a baby registry that was registered at a Target that is a couple towns over.”

The registry immediately put Pris on edge, as he has a fairly uncommon name. So she called her best friend and they did some more sleuthing, ultimately coming up with a Facebook page for the mother listed on the registry. Her pictures showed that she gave birth to a baby in May, and further digging into the Instagram account of the photographer who did the maternity and newborn shoots showed Pris’s boyfriend happily posing as part of the family.

When she tried to call him to confront him about what she found, her calls went straight to voicemail. She had her cousin try, and her calls and texts went through, but he didn’t respond. So the cousin sent him all the pictures they found—and wound up getting blocked.

While she was unable to get ahold of her cheating man, Pris explained in the comment section of one of her videos that the baby mama called her on Facebook and said that their shared boyfriend denied he had any idea who Pris even was.

However, she was ultimately able to organize a sit down with the other woman so they could both get some answers.

As of Pris’s last update, she says her ex still hasn’t gotten back in touch with her and his baby mama tells her he’s still denying everything—despite Pris providing ample evidence of their relationship for the past year and a half.

“I felt like he loved me. I felt like I was going to be with this person forever. Like, I had no doubt in my mind that he was the one,” she said.

Discovering your relationship was built on so many lies is a hard pill to swallow, and Pris has been open about how difficult that has been for her, particularly without being able to get any closure from her ex.

“He took me out of the darkest place in my life just to put me back in there,” she said. “He just fucking shattered my heart.”

Update 5:55 pm CT Aug. 7: In a statement to the Daily Dot, Pris said she’s gone through a rollercoaster of emotions but is feeling better.

“Not getting any closure over the whole situation has definitely taken a toll on me but I’m trying my best to keep my head up & move on,” she said. “Everything happens for a reason. Better I found out now rather than however long he was going to keep this going on for.”

Her ex-boyfriend still has not acknowledged the situation, but she said the conversation with the other girlfriend was helpful.

“We handled it very mature & were able to answer any questions either one of us had,” Pris wrote to the Daily Dot. “In a way I felt like talking to her gave me a bit of closure. Of course it wasn’t anything I wanted to hear, no one want to hear about their boyfriends secret life haha. But just to be able to talk about it & get how I feeling out did help in a way.”