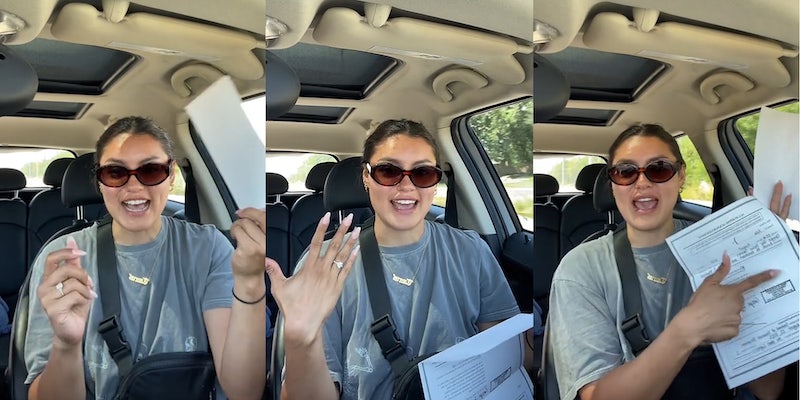 ‘I’m never entering another relationship without this contract’: Woman gets notarized document saying her partner has to pay her bills if he cheats, sparking debate

'That's not crazy… you’re holding him accountable for his actions.'

A user on TikTok claimed her fiancé voluntarily signed a contract saying that if he cheats, he has to pay all of her bills.

In a video with over 6.7 million views, user Chaylene (@salamiiqueen) shows the contract, also revealing that she’s had it notarized.

“I have just reached a new level of crazy,” she says at the beginning of the video.

“I’m so smart, or crazy. I don’t know,” she shares at the video’s conclusion.

In a follow-up video, she explained the situation further, saying that her fiancé typed it up himself and included several elements that were specific to their relationship.

In this video, Chaylene also claims that the creation of the document should not be viewed as a marker of insecurity in their relationship.

“I do have some trust issues. I, financially, have been screwed over so many times that I just… when it comes to money, I get scared, and I don’t trust so easily about it,” she details.

Additionally, the clause was actually added by her fiancé. He was inspired to do so after Chaylene made a joke about including something like it while the couple was organizing their finances and other documents.

“I think that’s super romantic and cute and cheesy,” she explains.

However, while her document seems less serious than it initially appeared, Chaylene says she’s not opposed to people doing the same thing in their relationships.

“Even if a girl did want to do that, who are you men to say that they can’t?” she asks. “Because guess what? People cheat. All the time. And girls waste their time, and time is money.”

In comments, users were largely supportive of Chaylene.

“This is by far the smartest thing I’ve ever heard,” wrote one user.

“If they aren’t willing to do this, I don’t want them,” added another.

“I’m never entering another relationship without this contract,” claimed a third.

However, some took the opposing view.

“No trust already. Setting it up for failure,” opined a TikToker.

“All I wanna say is that if you’re not confident that they won’t cheat on you, then you prolly shouldn’t be marrying them,” a further user noted.

We’ve reached out to Chaylene via Instagram direct message.